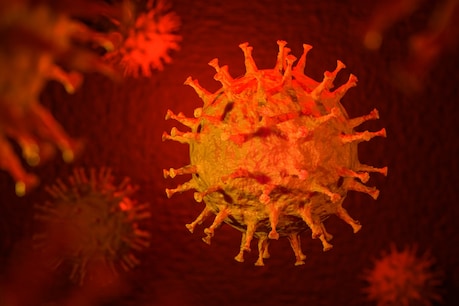 There are currently more than 33 thousand active cases in Uttarakhand. (Token photo)

In Uttarakhand, figures are increasing every day. At the same time, hospitals are also overloaded. By 6:30 pm in AIIMS Rishikesh, 19 out of twenty beds with no oxygen were full.

Dehradun. Five thousand new cases of Corona virus have been found in Uttarakhand on Saturday. Five thousand positive cases in a day is the largest figure since the onset of corona infection in Uttarakhand. There were also 81 deaths on Saturday and this figure of deaths is also the highest ever. In Uttarakhand, the figures are increasing every day. At the same time, hospitals are also overloaded. By 6:30 pm in AIIMS Rishikesh, 19 out of twenty beds with no oxygen were full. Out of the three hundred beds of Ozlubbanxigen, only 41 beds were empty, while out of 70 ICU beds, 55 beds were full.

55 beds are full
A large Kailash hospital in the capital’s large private hospitals is packed with Kovid patients. Here all 64 beds of General, all 120 beds of oxygen and all 56 beds of ICU are full of patients. In Sushila Tiwari Hospital of Haldwani, 291 beds out of 370 oxygen beds are full, while all 55 beds of ICU are full.Sample backlog is created
There are currently more than 33 thousand active cases in Uttarakhand. More than fifty per cent of these people are in Home Isolation. Samples are being taken between thirty thousand to forty thousand in the state every day. There is also a lot of pressure on the labs testing the corona. As a result, a backlog of more than 22 thousand samples remains.

Infection rates have risen to 29 and 28 percent
However, given the way that Kovid’s patients are getting at a higher level, there is a need to increase the capacity of the corona testing labs along with increasing the volume of tests. Social activist Anoop Nautiyal, who has been continuously studying the Corona figures for a long time, says that in Uttarakhand, there are still not a thousand tests on a population of one lakh. Pithoragarh, Almora, US Nagar, Tehri, Nainital, Bageshwar, Chamoli, Champawat, Rudraprayag, Pauri, Uttarkashi Jains districts have very poor performance. Here about 48 to 127 tests are being done daily on a population of one lakh, which is inadequate. In Pauri and Tehri Janse districts, the infection rate has reached 29 and 28 per cent in the last three days.