Mumbai. Jee Ni Karda, the second song from the film Sardar Ka Grandson by actor Arjun Kapoor and Rakul Preet Singh, has been released today. In this Punjabi song, Arjun and Rakul are seen dancing in the procession. Arjun Kapoor has shared the song on social media. Sardaar ka Grandson The film is going to be released on Netflix.

Arjun Kapoor While sharing the song, wrote, ‘A little drama and lots of fun. You all have come to make Bhangra on this song. No, Karda has been released. On this post of Arjun, many of his fans have commented that the song is fantastic. The song begins with the preparation of Arjun Kapoor and Rakul Preet. Both are seen getting ready for the procession. After that he continues to see Rakul dancing. In this way, a child comes to Arjun and teaches some steps of Bhangra. 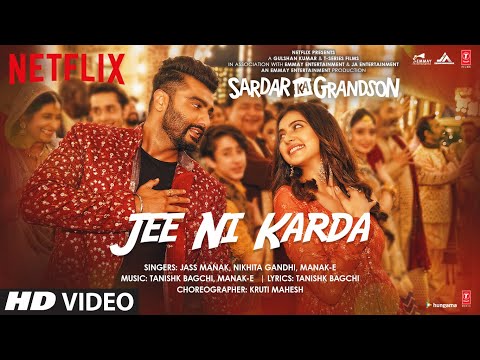 before this Arjun Kapoor The first song of ‘Dil Hai Deewana’ was released. Actor says about this, my experience with Rakul during the shooting of ‘Dil Hai Deewana’ song was very good. It is an out-and-out dance track with fun vibes, which is very beautifully captured by the directors Radhika-Vinay. Whenever it comes to music, Bhushan Kumar always works towards giving great music and I definitely think ‘Dil Hai Deewana’ will be such a great party song for the people. Arjun Kapoor was last seen in the film Sandeep and Pinky absconding with Parineeti Chopra. The film was released in theaters. Due to being released in theaters during the epidemic, the film was not able to show anything special. These days Arjun is going to be seen in his upcoming film Ek Villain 2 along with Disha Patni, John Abraham and Tara Sutaria.