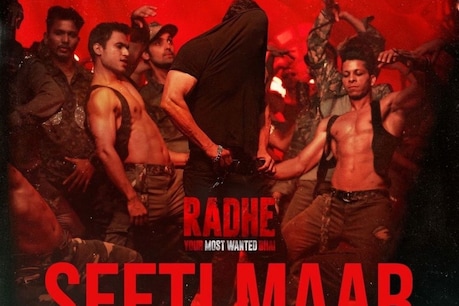 The producer and director is going to release the film’s popular song ‘CT Maar’ on Monday. (beingsalmankhan / instagram)

In view of the fanfare, a new poster of the song ‘Seeti Maar’ was released on Sunday, in which Salman Khan’s face was covered with a T-shirt. On Saturday, Disha Patani, who was playing Salman’s opposite lead actress, shared her first look with the song.

Mumbai. The trailer of Bollywood’s ‘Dabangg’ Salman Khan’s most awaited film ‘Radhe: Your Most Wanted Bhai’ has been released. Since its release a few days ago, the film has received a good response from the audience. Salman Khan Films is producing this film in association with Zee Studios, which is being directed by Prabhu Deva. The producer and director is going to release the film’s popular song ‘Seeti Maar’ on Monday.

Seeing the growing bickering of fans, a new poster of the song was released on Sunday, in which Salman’s face was covered with his T-shirt. On Saturday, Disha Patani, who was playing Salman’s opposite lead actress in the film, shared her first look with the song.

Composed by Devi Sri Prasad, Shabbir Ahmed’s lyrics and Kamal Khan and Yuliya Vantur have lent their voice to the song. It has been choreographed by Sheikh Jani Basha. In this way, ‘CT Maar’ has all the qualities of a chartbuster. Salman Khan plays Disha Patani, Randeep Hooda and Jackie Shroff in an important role in the film ‘Radhey: Your Most Wanted Bhai’. As of now, the producers are going to release the film simultaneously in theaters and online streaming platforms (OTT).

This is the first song of this film which is being released. Its poster is also gaining the attention of the audience. In this song, Disha Patni will be seen with Salman Khan. The way the fans are reacting to the trailer and cameo of ‘CTMAR’, it seems that this song will be able to make its way straight to the first place in the music charts.