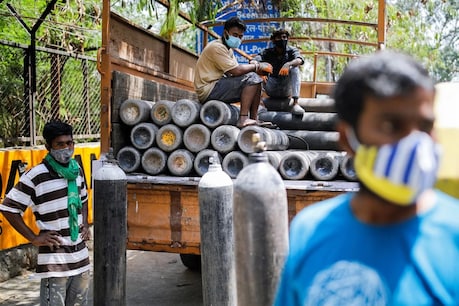 CAT has praised the country’s leading entrepreneurs for providing oxygen.

CAT (CAIL) said that the entrepreneurs have come forward to help the country in difficult circumstances, they are the real sons and daughters of the country. He helped when there was an outcry in the country due to lack of oxygen. There may be some differences between all of us industrialists, but for the nation, all stood together and helped by moving forward.

New Delhi. The Confederation of All India Traders (CAIT), a trade union, has praised many leading entrepreneurs of the country for extending their helping hand in the midst of the Corona crisis. Chairman of CAT, BC Bhartia and General Secretary Praveen Khandelwal said that leading entrepreneurs of the country made uninterrupted supply of medical oxygen every day in this difficult period. Kat said that Mukesh Ambani, the warehouseman of Reliance Industries, Ratan Tata of Tata Group, Naveen Jindal of Jindal Steel, Anil Agarwal of Vedanta Group, Madhav Vaidya, Wareman of Indian Oil, provided oxygen to the country every day.

‘The entrepreneurs prove they are the real sons of the country’
Bhartia said that apart from these, Bharat Petroleum Chairman K.K. Many entrepreneurs including Padmakar, SAIL chairman Soma Mandal, JSW’s Sajjan Jindal have done commendable work in the midst of the Corona crisis. All of them have come forward to help the country in difficult circumstances, proving that they are indeed sons and daughters of the country. He helped when there was a ruckus in the country due to lack of oxygen. Bhartia and Khandelwal said, ‘We may all have differences between entrepreneurs on some issues, but all stood together for the nation and helped by moving forward.

Khandelwal and Bhartia, meanwhile, took a dig at foreign companies, saying that no foreign company has come forward to help us in the face of difficult situation facing India, while these companies make huge profits every year by doing business on our land. Huh. Not only this, some companies are earning billions of rupees every year by using wrong methods and violating laws. They are trying to capture our business. He said that the Indian public should understand that even after earning profits from us, these foreign companies that do not help us, cannot be ours. We should understand that we still have our own – howsoever in the world.