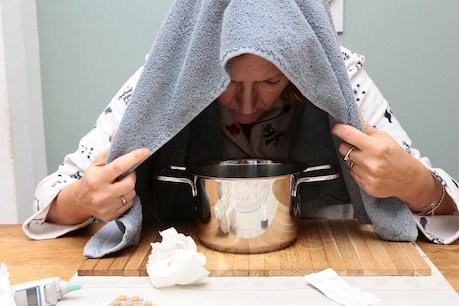 People are trying different ways to avoid corona to avoid corona. Those who are corona positive are using a variety of things to recover and those who are not positive to avoid the corona virus. One of these methods is One way is steam inhalation. Many people are resorting to this many times a day. Not only this, this method has been adopted in the treatment of corona patients in many hospitals. But a video has raised questions on this so-called way of protecting against corona from Corona. It has been said in this video that corona will be cured by taking steam, it cannot be said, but this method of steam inhalation can make you seriously ill. Let’s know about it.


To alert those who use it continuously and many times, without knowing what side effects of taking steam can be ‘Unicef ​​India’ has shared a video on its Twitter handle. In this video, Paul Rutter, Regional Advisor and Child Health Expert for UNICEF South Asia, has stated that there is no evidence that Kovid-19 can be eliminated by steam.

Also read: Children of the womb are at risk of corona virus, know how

Taking steam can increase the difficulty.

In this video, Paul Rutter, Regional Advisor and Child Health Expert of UNICEF South Asia has also told that the result of taking steam to avoid the virus can be quite bad. Constant steam ingestion may burn or severely damage the torquia and pharynx in the pipe between the throat and lungs. Due to which the person may have more difficulty in breathing and the virus can also enter your body very easily. That is, according to this video, the World Health Organization does not recommend taking steam as a treatment for corona.