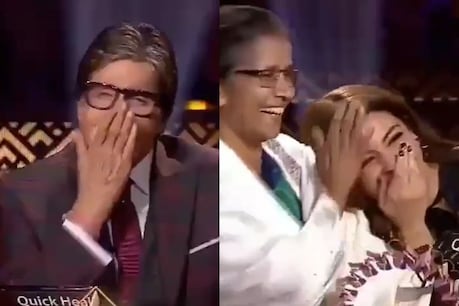 Mumbai Bollywood actress Anushka Sharma and Indian cricket team captain Virat Kohli, apart from their professional lives, are also in the discussion about their romance. Videos and pictures of both are often viral on social media. Whenever Virat Kohli does some charisma in the cricket field, he definitely gives flying to his wife Anushka Sharma. This thing is not hidden from anyone. The special thing is that Amitabh Bachchan has also notices this thing very well. Three years ago, during the Kaun Banega Crorepati, Big B had also expressed this fact in front of Anushka.

To this, the contestant says that she does not watch cricket. That’s when Amitabh Bachchan says that Anushka watches. When the woman appears a bit confused, Anushka tells him that her husband (Virat Kohli) is a cricketer and she watches cricket for him. Amitabh Bachchan teases them on this – ‘Only to see them.’ In response, Anushka says- ‘No sir, to support the team.’

That’s when Amitabh Bachchan says- ‘Everyone knows what happens on TV’. At the same time, Big B also points towards Virat while flying. Ever since Anushka Sharma became a mother, she is spending all her time with her daughter Vamika. Anushka has shared her daughter’s pictures with the fans, but she has not shown the daughter’s face to the fans. One reason for this is that Anushka and her husband Virat Kohli do not want their daughter to be surrounded by the media.