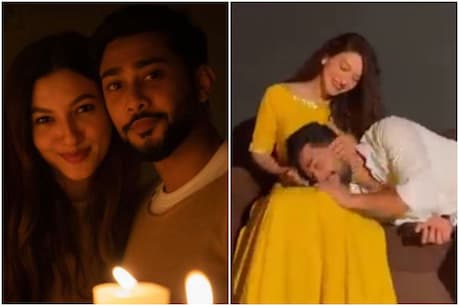 Life partner being younger or older than himself (Life partner being older or younger) does not matter. It only matters that how is the mutual relationship between them, how much is love, trust and trust in the relationship. Today we will tell you about some actresses who have chosen a person who is many years younger than them in life, is a Chosen as life partner. All these couples are living a loving life with each other. Let’s know about them. Archana Puran Singh-Parmeet Sethi Who does not know the pair of Archana Puran Singh and Parmeet Sethi. Parmeet Sethi is eight years younger than his wife Archana. Archana and Parmeet got married on 30 June 1992. He kept the matter of his marriage hidden for four years. The couple has two sons. Also read: These actresses are ‘princesses’ in real life, they belong to royal houses Neha Kakkar-Rohanpreet
Neha Kakkar chose Rohanpreet as her life partner seven years younger than her. Neha and Rohanpreet were married on 24 October 2020 in Delhi. Both were in a relationship for a long time. Gauhar Khan-Zaid Darbar Gauhar Khan has recently married Zaid Darbar, who is twelve years younger than him. Both were married on 25 December 2020. Zaid is the son of famous music director Ismail Darbar. Kishwar Merchant-Suyash Rai Actress Kishwar Merchant, who was seen in Bigg Boss Season 9, is married to Suyash Rai, who is eight years younger than him. They got married on December 16, 2016 after being in a relationship for 6 years. ALSO READ: In the Corona era, these celebs lived in a buzzing house, while some heroines were enjoying their pregnancy. Yuvika Chaudhary-Prince Narula Yuvika Chaudhary, contestant of reality show ‘Bigg Boss’, has chosen Prince Narula as her partner. Prince has also been a contestant of ‘Bigg Boss’ with Yuvika. Prince Narula is seven years younger than his wife Yuvika. Both were tied on 12 October 2018 in marriage. Bharti Singh-Harsh Limbachia Comedian Bharti Singh has married Harsh Limbachiya. Both of them got married on December 3, 2017 after being in a relationship for years. Harsh is eight years younger than his wife Bharti.