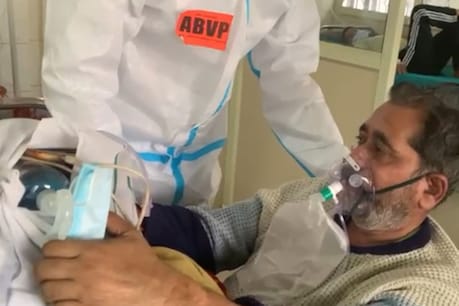 Uttarakhand News: According to the guidelines of the National Center for Disease Control (NCDC), no one is allowed to go to the Kovid ward like the high risk zone, but the workers of ABVP are not just roaming in this largest Kovid dedicated hospital in Dehradun. Have been, but are also making videos of giving juice to patients.

Dehradun. Shocking pictures have emerged from Uttarakhand’s capital Dehradun. The largest Kovid dedicated government hospital in Dehradun is of Doon Hospital. Here, some people wearing PPEKit are entering the Kovid ward and removing the oxygen pipe of Kovid Patient and giving them juice. These people are workers of ABVP, the student wing of BJP, the All India Vidyarthi Parishad. There has been a stir after the pictures of the Kovid patient making a video of him drinking juice while wandering in the ward in Kovid. According to the guidelines of the National Center for Disease Control, no one is allowed to go to the Kovid Ward Janse High Risk Zone, except the medical staff, but in this Dehradun’s largest Kovid Dedicated Hospital, ABVP workers are not only roaming, but also the patients Juices are also being made for drinking. ABVP sticker has also been paste on their PPE kit. The question arises that when the patients of the patients are not allowed to go to the Kovid ward for fear of infection and safety, then who gave permission to the workers of ABVP and to the Kanshe Kovid ward. Principal of Doon Medical College, Dr. Ashutosh Sayana, says that ABVP workers were allowed to help in making arrangements in the hospital campus. The question arises that how did these people then enter the ward. Saina did not say anything on this. However, DM Dehradun Ashish Kumar Srivastava admitted that this was serious negligence. In this way, no outsider can be given permission to go to Kovid ward. DM Dehradun has ordered an inquiry into the entire case. In the latest case, the Congress is besieging the government. Congress spokesperson Garima Dashauni says that the ruling party should be more accountable but, go to this extent only to gain numbers. Dashauni says that this is a worrying situation. The state government should take strong action on this. Congress state vice-president Suryakant Dhasmana also reacted sharply. Dhasmana was quarantined by the district administration for 28 days in March last year. Because, taking stock of Dhasmana arrangements, Kovid had reached near the ward in the presence of doctors. Dhasmana says that even today there is the same DM, there is a hospital, the situation of Kovid is many times more dangerous today, so the district administration should still take action. BJP, on the other hand, has overthrown the entire issue. BJP state general secretary Kuldeep Negi says that ABVP is not a BJP organization. ABVP is a subsidiary organization of RSS, so only the Sangh can comment better than BJP.