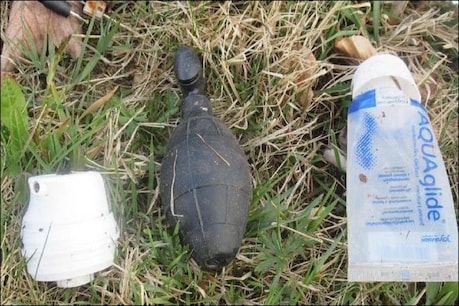 In Germany, a woman saw something like a granade in polythene, when the police investigated, it was discovered that she was a sex toy.

Berlin. A woman jogging in Germany saw something like a grenade in transparent polyethylene, after which she reported to the local police. Showing immediate activism, the police laid siege to that place and called the bomb disposal squad. When the team of the expert searched this stuff with full fervor and security, it turned out to be a sex toy in the form of a grenade. This polythene was found in a forest outside the Bavarian city of Germany. This area falls near the Czech Republic and the borders of Austria. Therefore, the police did not have much doubt. Bombs dating back to World War II are frequently found all over Germany. Therefore, after stopping the movement of people in this area, the bomb disposal squad was informed about it. On seeing that grenade-shaped thing in transparent polythene, the officers of the bomb disposal squad also came to the rescue. She weighed her security suit weighing several kilograms and took the polythene to a safe place with the help of a robot. However, when it was investigated, it turned out to be a sex toy in the shape of a grenade. Condoms and lubricants were also found in this polythene. The condom and lubricant were kept in a device-like compartment, which convinced the police at first that it was an explosive item. The police spokesperson told German news agency DPA that they suspected that a man wanted to throw it in a deserted area instead of putting it in a dustbin. More than 75 years after the end of World War II, bombing is common in Germany. Also read: Joe Biden said – after 20 years, the time has come to call home the US troops from Afghanistan.A 500 kg bomb was found a few days ago Last week, during the construction of a house in the southern German city of Mannheim, a 500 kg bomb from the time of World War II was found. It was dropped from a fighter aircraft, but it was sunk into the ground instead of exploding. Police later told that the place where the bomb was found was the base of the US Army. Which was later defused.