The persuasion of Sonu Sood’s generosity is not only public but also actor-actress. Sonu is becoming so famous that people want him to contest elections now.

Mumbai: Bollywood actor Sonu Sood People’s expectations about it have started increasing. Considering the way Sonu is constantly engaged in helping people, people are now considering him as their leader as well. Many people want that the leader of our country should be like Sonu Sood. While working in Bollywood, his fan following was not as much as his Messiah. Sonu is going to do his work in a very peaceful manner. Now actor Aditya Seal has expressed his wish on social media. Actor wants Sonu Sood to contest the election. Aditya Seal posted a post on his Insta Story. In this post, Aditya wrote that ‘If Sonu Sood stands for elections tomorrow, my vote will go to him only’. Aditya’s post on social media has started becoming viral as soon as he writes. 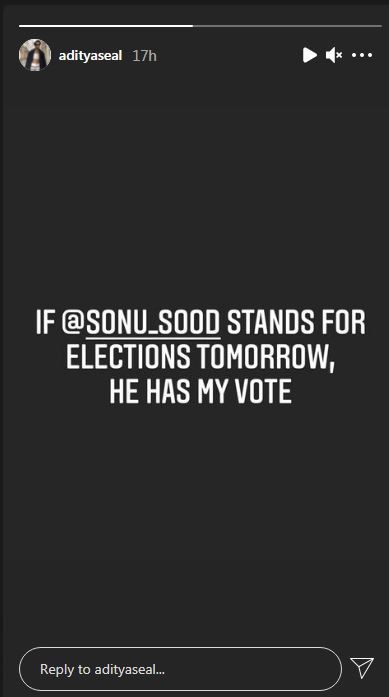 Let us tell you that Aditya Seal made his Bollywood debut with the film ‘Ek little love story’ with Manisha Koirala. However, this actor got fame from the film ‘Tum Bin 2’. Aditya has acted in films like ‘Namaste England’, ‘Student of the Year 2’ and ‘Indu Ki Jawani’. Sonu Sood had recently become corona positive but has now recovered. Actors are constantly working to help corona positive patients. Thousands of lives are in crisis due to Corona epidemic. The condition of hospitals has deteriorated. People are seen pleading for help. Recently, the actor expressed disappointment over the situation in Delhi. Sonu Sood even said in his tweet that it is easy to find God in Delhi, but not to find beds in the hospital.