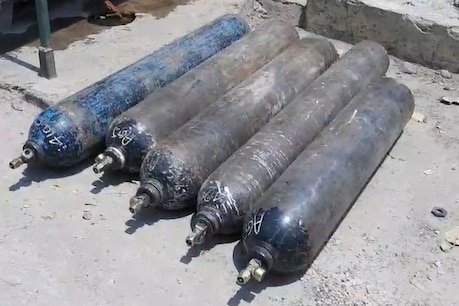 Patients have lacked oxygen during the coronary period. Gas refilling plant operators are cutting silver due to lack of oxygen in government and private hospitals in Haridwar. Due to lack of oxygen available in the hospital, the family members of the patient are forced to buy a cylinder of oxygen at their own cost.

Pulkit Shukla Haridwar. The growing infection of corona has left health services in a state of disarray. Patients have lack of oxygen. In Haridwar, gas refilling plant operators are cutting silver due to lack of oxygen in government and private hospitals. Due to lack of oxygen available in the hospital, the family members of the patient themselves leave to take a cylinder of oxygen. In such a situation, the oxygen sellers are charging for the asking price. The Haridwar district administration has currently banned the delivery of oxygen for industrial use. Oxygen is being sold only for medical use. The price of empty cylinder of oxygen gas is seen to be increasing wildly. In ordinary days, a cylinder of 5 thousand rupees is available up to 15 thousand rupees these days. At the same time, the authorities are keeping silence on the black cylinder sale of oxygen cylinders. The general public has to bear the brunt of this negligence of the officials. Skyrocketing prices due to increasing demandWhen the demand for anything in the market suddenly increases, then its prices also increase. KK Modi, who runs the Ashoka Gas Agency in Jwalapur, says that if someone in the house has a problem breathing or oxygen is not available in the hospital, then such people themselves come to them to get oxygen. The biggest problem is with the empty cylinder. The 10 liter cylinder used to get 5 thousand rupees is now barely getting up to 15 thousand rupees at 3 times the price. Liquid is also not available in sufficient quantity due to high demand, so there is a problem in giving oxygen gas to all the people. Officers are unable to provide answers The Haridwar district administration is making a million claims to remove oxygen shortage and stop black marketing, but the situation on the ground seems to be completely opposite to the claims. To overcome the shortage of oxygen, the district administration has now banned the industrial supply of oxygen. The dealers have given instructions to give oxygen gas only to the real needy, but this preparation of administration is proving to be insufficient. Officials are refraining from responding to the issue of oxygen gas shortage and black marketing.