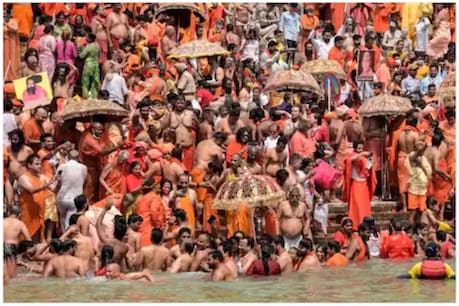 According to the officials, during the Haridwar Kumbh, 50 lakh devotees took a holy dip in the Ganges. At the same time, on January 14, when the Sun entered Makar Sankranti, from then till the end of April, about 91 lakh people turned to Haridwar.

Dehradun. After Dehradun in Uttarakhand, if any district is most affected by Corona, then it is Haridwar. On Saturday, around 5500 new cases of Kovid were registered in Uttarakhand, out of which 578 were from Haridwar alone. During the Kumbh from April 1 to April 30, more than 15 thousand cases of Kovid came from Haridwar district, in which the contribution of the city was the highest. According to the officials, half a crore devotees took a holy dip in the Ganges river during Haridwar Kumbh. Officials claim that in April alone, 50 lakh people registered their arrival at Haridwar Kumbh. At the same time, on January 14, when the Sun entered Makar Sankranti, from then till the end of April, about 91 lakh people turned to Haridwar. However, the experts do not agree with these government figures. Inspector General (Kumbh) Sanjay Gunjyal expresses satisfaction that Haridwar Kumbh was completed without any accident for the first time. Kumbh was different in many respects This time around Kumbh, there was a situation of unease from the beginning. While the Trivendra Rawat government of the former was in favor of making Kumbh symbolic in Haridwar, in March, the new Tirath Singh Rawat government opened Kumbh completely to the common people. But at the same time, the condition of taking Kovid negative report was also placed on the passengers coming. However, despite all the restrictions, lakhs of people were recorded in Haridwar. Thousands of saints from the thirteen akharas in Haridwar did not show interest from the beginning with the Kovid test. The result was that suddenly there was an unprecedented rise in the cases of Kovid.Even if saints come, devotees also come positive In the month of April, three royal baths took place on 12, 14 and 27 April. Especially in the bath of April 12 and 14, a crowd of lakhs appeared on the streets of Haridwar. This was the time when the cases of Kovid started increasing in India. At the same time, due to Kovid, three Mahamandaleshwaras also died and hundreds of saints became positive. The president of the Akhara Council, Narendra Giri himself, was hospitalized for several days. In the midst of all this, Prime Minister Narendra Modi had to come forward and he appealed to the saints that the next Kumbh should be celebrated only in indicative manner. The PM’s appeal was effected and Juna eldest Juna Akhara declared his departure from Kumbh. Earlier, Niranjani Akhara had also announced to leave from Kumbh.