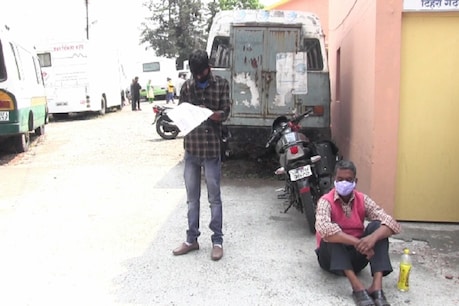 Kovid patient had to sit on the road and wait.

Uttarakhand News: Alam of chaos and carelessness also happened that when the ambulance arrived, the patient could not be taken to the hospital immediately. Laterally the procedures continued and the patient’s condition deteriorated there.

Tehri Garhwal. In the Kovid-19 era, the helplessness of the health department is coming to the fore in Tehri. A corona positive patient was referred to Kovid Hospital Narendranagar but could not get an ambulance for about an hour and a half. The patient sat on the road outside the hospital hoping for an ambulance. It is easy to understand from this whole case that what is the condition of waiting till the waiting for the Kovid patients in the hospitals. In Tehri district, cases of Kovid infection are continuously increasing and the atmosphere has become of panic. The claims of the Health Department are such that all the arrangements are correct, but the negligence of the department is overshadowing the Kovid patients. If you take a look at the latest situation, then it is known that where the claims are proving hollow. read this also : CT scan became important, so the question arose as to what is the lack of radiologists? Condition deteriorated and waiting for ambulance!According to the latest case, on May 3, 52-year-old Gaddulal from Chaka in Narendranagar went to New Tehri Primary Health Center for a Kovid test on the complaint of breathlessness. He was found to be Kovid positive and in view of his deteriorating condition by the doctor, he was referred to Narendranagar Kovid Care Hospital. But due to no ambulance, the Kovid patient had to sit on the road near the hospital premises. Not only this, his son Neeraj along with the patient also sat on the road for more than an hour waiting for an ambulance. Seeing the deteriorating condition of the father, Neeraj got the answer of the ambulance driver’s number on the round of doctors, on which he got the answer that the ambulance will arrive in a short time. The claims of the Health Department in Tehri are proving to be hollow.

Late in the paperwork again! After about one and a half hours, the ambulance arrived, even then getting immediate help to the patient was another major complication. According to Neeraj’s complaint, the ambulance driver placed the patient in the ambulance but instead of going to Narendranagar, Kovid Care Hospital kept talking about making papers. read this also: Why not decide the price of CT Scan? Delhi High Court intervened on this question Neeraj told that after his father’s condition deteriorated and he delayed his request to the doctors, CMO Dr. Suman Arya intervened in this matter. After this, the ambulance could be dispatched after about two hours. Cry of medical staff Testing is being done for patients with symptoms of Kovid in New Tehri Primary Health Center, where large number of people are reaching everyday. It is being told that this center is struggling with the shortage of medical staff, due to which, along with the delay in the Kovid test, the report is also getting delayed. For this reason, it was said that there will be delay in other arrangements as well.