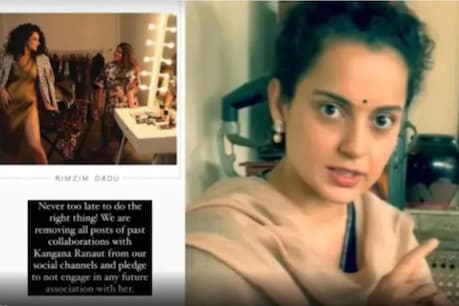 Kangana Ranaut seems to be getting into trouble again with her controversial tweet. Kangana’s Twitter account has been suspended. Along with this, fashion designer Anand Bhushan and Rimzim Dadu have also taken strong action against the actress.

Mumbai. After BJP’s defeat in Bengal elections Kangana Ranaut He has started to become increasingly disputed by making rhetorical statements. When Kangana tweeted about the violence in West Bengal, Twitter suspended her account for violating the rules. After this, Kangana appealed to impose President’s rule on Instagram account. Now fashion designers Anand Bhushan and Rimzim Dadu have announced to ban Kangana from their projects. Both famous fashion designer Anand Bhushan and Rimjim Dadu told on social media that all further projects with Kangana Ranaut are canceled. Rimjim Dadu has shared on his Insta story that all the photos of his collaboration with Kangana are being removed from social media. Rimjim shared a photo with Kangana and wrote the post- ‘It is never too late to do something right. We are removing all the posts of our previous collaborations with Kangana and will not work with them further. ‘ At the same time, Anand Bhushan wrote on Twitter, ‘After watching some of today’s events, we have decided that we are removing all the photos of our agreement with Kangana from social media accounts. Apart from this, we have also decided that we will not keep any contract with them even further. We do not support hate speech as a brand ‘. Actress Swara Bhaskar has also retweeted this post made on social media by fashion designer K Kangna Ranaut. Sharing the screenshots of both the tweet and Instagram story, Swara wrote, ‘Nice to see it all. You both should praise that you raised your voice against those who spoke hate speech ‘. Sharing this post of Swara, Anand Bhushan has also thanked Swara. Let me tell you that after being suspended from Bollywood’s ‘Panga Girl’ Kangana Ranaut tweeter, where there are constant targets of trolls. At the same time, his fans are posting in support, calling him a brave lioness.