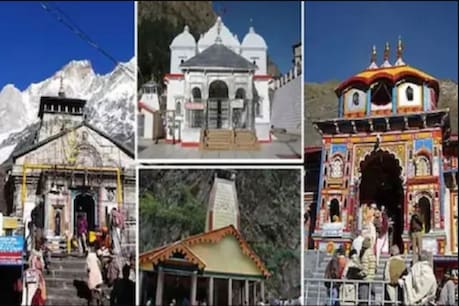 SOP issued for opening of the doors of Char Dham Yatra.

Uttarakhand Char Dham Yatra: Out of the four dhams in Uttarakhand, Yamunotri kapatas will open on 14 May while Gangotri on 15 May, Kedarnath on 17 May and Badrinath Dham on 18 May. Learn how the journey will be possible.

Dehradun. The Char Dham Yatra has been continuously in the limelight amid the second wave of Corona in Uttarakhand. Earlier this trip was in the discussion regarding suspension, but now in connection with the opening of the Char Dham kapat, according to the Standard Operating Procedure i.e. the standard guidelines, who will be able to travel and under what conditions. With the opening of the doors of Char Dham in Uttarakhand, the SOP has been issued regarding the corona in temples. According to the news agency ANI, only local rights related to the Rawals, priests and temples in Badrinath, Kedarnath, Gangotri and Yamunotri will be able to go to Hakuk Dhari, Panda Purohit, employees and officers. Not only this, everyone will also have to keep a corona negative report with them. read this also : If the ambulance was not found, then the Kovid patient had to sit on the road and wait. Earlier, News18 told you that the state tourism minister Satpal Maharaj had been in favor of the yatra despite the increasing cases of Kovid, but the Char Dham Yatra was currently suspended by the Chief Minister of Uttarakhand Chief Minister Tirath Singh Rawat. It was said that The government said that if everything goes well, it will be possible to reconsider the decision further.