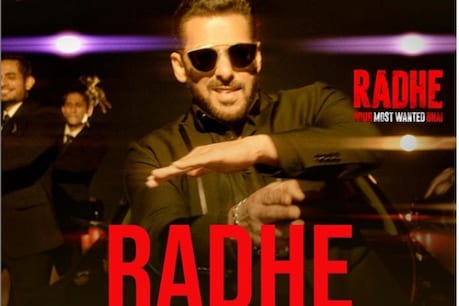 The title track of ‘Radhe’ will be released tomorrow. (Photo courtesy: beingsalmankhan / Instagram)

The most awaited film ‘Radhe: Your Most Wanted Bhai’ is set to release on May 13 this year on the occasion of Eid. At the same time, the title track of this film ‘Radhe’ will be released tomorrow.

Mumbai. Salman Khan Two songs of Radhe: Your Most Wanted Bhai, from the most awaited film of Radhe: Your Most Wanted Bhai, are already rocking. The audience of the film ‘Radhe’ is eagerly waiting. After watching the trailer and two songs of the film, the wait of the audience has increased. Now the title track ‘Radhey’ will be released tomorrow i.e. on 5 May. Salman himself has given this information while sharing the new poster of the film. Salman Khan, sharing the title track of the film with his official Instagram and Twitter account, wrote, ‘Kal Aaya Most Awesome’ Radhe ‘title track’. Fans are pouring their love on Salman’s post. Salman is constantly commenting on this post with fire and heart emoji. Over 3 lakh likes have been received within an hour of this post. Salman Khan is seen showing the swag in the poster of the film on Instagram. Salman is seen in black dress and black goggles. According to the information received from the poster itself, the title track of ‘Radhe’ has been given music by Sajid-Wajid. Sajid has also written this song, and has also given his voice. The choreography is by Mudassar Khan. Disha Patni, Randeep Hooda and Jackie Shroff will also be seen in important roles with Salman Khan in ‘Radhe: Your Most Wanted Bhai’. This film has been produced by Salman Khan Films in association with Zee Studios. The films of Salma Khan, Sohail Khan and Reel Life Production Private Limited will be released on May 13 on the occasion of Eid this year. The films can be seen on the ‘Pay-Per-View’ service Zee Plex on the G5. Apart from this, DTH platforms such as Dish, D2H, Tata Sky and Airtel will also be able to watch on digital TV.