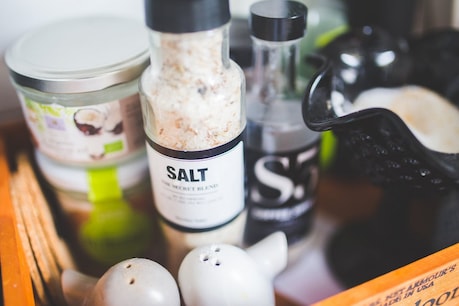 Due to high amount of salt in the body, many fatal diseases can occur. Image Credit: Pexels / Kaboompics .com

According to the WHO, most people in the world are consuming 9 to 12 grams of salt every day on average, but if salt consumption is reduced, 2.5 million deaths can be prevented globally.

How Much Salt Should We Eat : Salt is an integral part of our food, but if we start incorporating it in large amounts, then it can also be harmful to our health. In view of this, the World Health Organization (WHO) has released a new guideline. It has been advocated that people should consume only 5 grams of salt in a day. The organization says that people in the world are generally using twice as much salt in their daily diet, which has caused the death of several million people. WHO According to the data, most people in the world are consuming 9 to 12 grams of salt daily on average, but if salt consumption is reduced to disciplined levels, then 2.5 million deaths globally can be prevented. Also read: Why should one not drink water while standing? Know the reason Sodium and potassium balance required The World Health Organization has developed a worldwide sodium level Global sodium benchmark for sodium level in food Under which, in order to save the lives of people, new standards have been prepared for sodium in more than 60 food categories. It is believed that by 2025, this benchmark will reduce salt consumption by 30 percent worldwide. Health experts believe that the balance of sodium and potassium is very important in our body. If more sodium is consumed with less potassium in the body, it can harm the health of any human being. Not only this, if there is a high amount of salt in the food, then it increases the risk of blood pressure, heart disease and stroke. Not only this, bones also become weak due to this.The intake of which products increases the amount of salt in the body rapidly We all know that salt intake is necessary to make a healthy plasma and keep the nerve healthy. But there are some processed things whose intake can increase the amount of salt in the body rapidly. In addition to food categories like processed food, packaged food, dairy and meat, there is also a lot of salt in spices, namkeen. Read also: Fact Check: Avoidance of corona due to consumption of alum is not just a fake claim, there is no scientific basis
Advantages and disadvantages of salt Salt is very important in keeping our body active. It keeps the body hydrated and also helps the thyroid to function properly. It normalizes low BP and also improves the symptoms of cystic fibrosis. Talking about its loss, its high intake increases the chances of heart diseases and also the possibility of stroke, high BP and kidney disease. May increase by leaps and bounds. (Disclaimer: The information and information given in this article is based on general information. Hindi news18 does not confirm these. Contact the concerned expert before implementing them.)