The actor was also seen in the Netflix film ‘Unfreedom’.

On Sunday, Rahul died due to Corona virus. Rahul Vohra was in the grip of Corona epidemic (Covid-19) for a long time.

New Delhi. Actor Rahul Vohra His wife Jyoti Tiwari is in shock after the demise. On Sunday, Rahul died due to Corona virus. Rahul Vohra was in the grip of Corona epidemic (Covid-19) for a long time. The actor was also seen in the Netflix film ‘Unfreedom’. Rahul married his long time girlfriend Jyoti Tiwari in December. Jyoti Tiwari is constantly demanding justice by posting on her Instagram. Jyoti recently wrote while sharing a video, ‘My Rahul is gone, but nobody else should go Rahul’. In the midst of his battle with Corona, the post that Rahul wrote on his Facebook is also constantly becoming viral on social media. Rahul wrote, ‘If I had got a good treatment, I would have survived too, your Rahul Vohra.’ 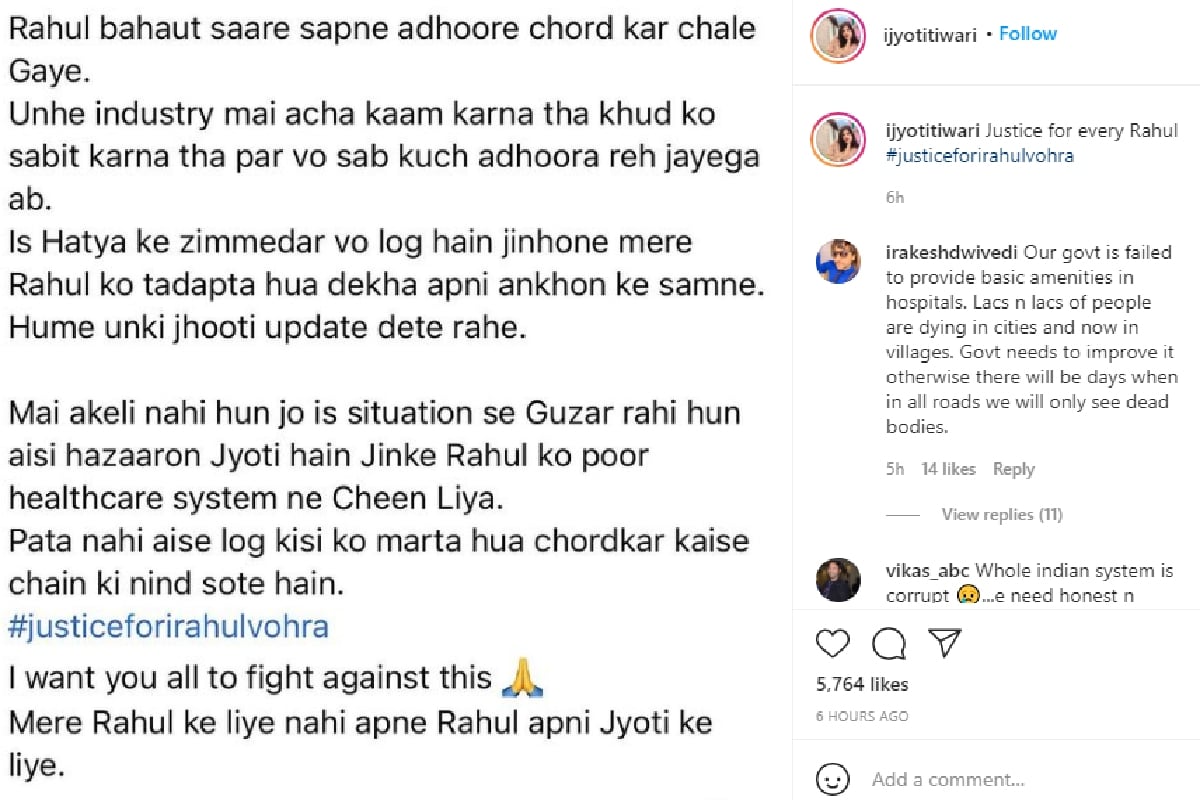 At the same time, Jyoti wrote another post today, ‘Rahul left a lot of dreams, he had to do a good job in the industry, but he had to prove himself, but everything will be incomplete now. Those people responsible for this murder are those who saw my Rahul suffering in front of their eyes and kept giving us their false updates. I am not the only one going through this situation. There are thousands of Jyotis whose Rahul has been snatched away by such a healthcare system. Do not know how such people sleep peacefully except someone dying. I want everyone to fight against this. Not for my Rahul but for my Rahul and my Jyoti.

Earlier, he shared a video, which was of the hospital where Rahul Vohra was admitted. He was admitted to the Rajiv Gandhi Super Specialty Hospital in Delhi, this video of the actor was posted by his wife Jyoti. In this video, Rahul is seen wearing an oxygen mask. While showing his mask, he says that this mask is very expensive today, without it the patient is flabbergasted, but there is no oxygen coming in it. The nurse came, I spoke to him, but he simply goes after filling a bottle of water.