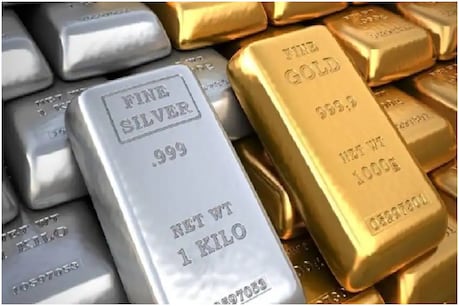 Silver is currently running well above the operating price of 2021, while gold is at a lower level.

With the rise in construction, silver prices have started rising. Apart from this, the declining supply against the demand for silver has also led to a surge in prices. With the improvement in the economy in the US (US), China (China) and European countries (European Union), its demand is increasing.

New Delhi. In the Indian markets, gold-silver prices are registering an increase for a week. At the same time, in 2021, silver has given investors far more profit than gold. Actually, the price of gold is going down by 4.39 percent from this year’s opening price of Rs 50,180 per 10 grams. In contrast, the price of silver (Silver Price) has increased by about 5% from the opening price of Rs. 68,254 per kg. Experts say that silver is a dual use as a precious and industrial metal. Therefore, its prices have been seen faster than gold. Why silver prices are continuously increasing With the rise in construction, silver prices have started increasing. Apart from this, the decreasing supply (supply) against the demand of silver has also created an atmosphere of price rise. Sugandha Sachdev of Religare Commodities Limited (RCL) says that silver is precious metal as well as industrial metal. With the improvement in the economy in the US (US), China (China) and European countries (European Union), its demand is increasing. At the same time, its prices are increasing due to the decrease in mining supply. He said that a broad base rally has been seen in the base metal complex. All the base metals have reached the high level of many years. The silver sentiment has improved with this. read this also- Gold Price Today: Gold fell after several days of fast, silver came down below 71 thousand, see new prices quicklyHow much gold and silver will give by the end of the year Anuj Gupta of IIFL Securities told Moneycontrol that the boom in the entire base metal complex and increasing industrial demand in China, the US and other European countries has created a huge gap in silver supply and demand. Sugandha Sachdeva says that silver prices can touch Rs 75,500-76,000 per kg in the medium term. At the same time, in the long term or by the end of 2021, its prices can reach up to Rs 85,000 per kg. At the same time, gold prices can touch the level of Rs 52,000 per 10 grams. In the long term, its prices can touch a level of up to Rs 60,000 per 10 grams.