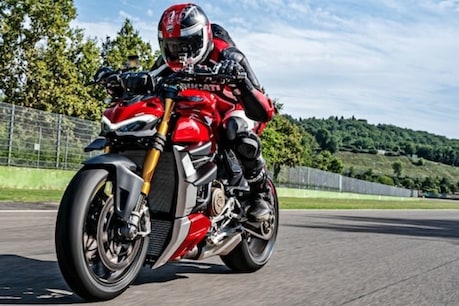 New Delhi. Ducati is Italy’s leading vehicle manufacturer which has now launched its new powerful bike Streetfighter V4 in the Indian market. The company has introduced two variants of this bike, which has a very good look and powerful engine. Ducati has priced the base variant of this bike at Rs 19.99 lakh and the S variant at Rs 22.99 lakh (ex-showroom). Streetfighter V4 Engine – Ducati has used the Desmosedici Stradale V4 engine in both these bike models. The bike uses a liquid cooled V4 engine of 1,103cc capacity, which generates 123 Nm of torque and 208 PS of strong power. The engine of this bike comes with a 6-speed gearbox. The bike also has Assist Clutch and Quick Shift along with Sleeper. Also Read: Hyundai’s Dhansu Offer! Can save entire Rs. 1.50 lakhs on electric car Kona till 31 May- Learn how Features of Streetfighter V4 – This Ducati bike has aerodynamic wings, LED daytime running lights with LED headlamps, sharp taillights and muscular fuel tank. Monoshock suspension is provided in the rear of this bike and Showa BPF forks in the front. Electronic adjustable shockers have been given in the premium S variants of this bike. For better braking facility, 245mm disc brakes have been used in the rear tire and 330mm in the front tire. Also read: This best selling bike has created a boom in the market! Royal Enfield’s cheapest bullet to compete Along with this, the 5-inch Fully Digital Instrument Console has been provided with swing arm and wide handlebars in the bike. Ducati has introduced this bike with two color options, which include dork steel and red color. For those who are fond of racing and sporty bike look, this bike can be a better option. The company will start selling this bike soon and will also start its delivery soon.