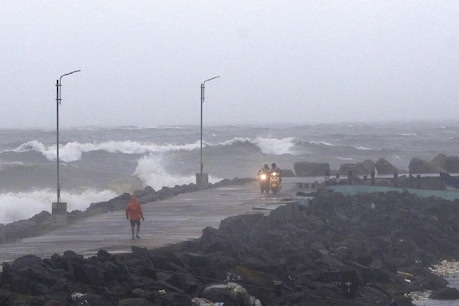 Heavy rains are expected at many places in India. (File pic)

New Delhi. Cyclone Tauktae has affected many domestic flights. The India Meteorological Department (IMD) has issued a high alert due to ‘Toute’ cyclonic storm (Cyclone Tauktae). It is being said that the low pressure area created in the Arabian Sea will turn into a ‘very severe cyclonic storm’ on 17 May. Meanwhile, airline service may remain affected. Indigo and Vistara Airlines flights may be affected for several states. Movement affected in these states According to Vistara Airlines, flights to Chennai, Thiruvananthapuram, Kochi, Bangalore, Mumbai, Pune, Goa and Ahmedabad could be affected by May 17 due to bad weather in the Arabian Sea. Also read- this 33-year-old man became a millionaire in 4 months by investing money in Dogecoin! Learn Success TrickFlights to and from Kannur affected The country’s largest airline Indigo has said that flights to and from Kannur have been affected due to the cyclone. Explain that a red alert has been declared in five districts of Kerala, Mallapuram, Kozhikode, Wayanad, Kannur and Kasaragod. Also read- Put money in this policy of LIC, there will be no tension of monthly expenses! You will get 9 thousand rupees every month
Refund will be given on flight cancell The airline tweeted, “Travel Advisory: Due to Cyclone Tauktae, flights coming from Kannur are affected. You can go to Plan B to choose an alternative option or get a refund.”

#6ETravelAdvisory: Due to Cyclone Tauktae, flights to/from #Kannur are impacted. You may visit Plan B https://t.co/DSSJqiVQRK to opt for alternate options or get a refund. You may check flight status here – https://t.co/tbHyUhYFKq.

Coast Guard and other agencies on high alert Due to poor sea conditions and heavy rains, fishermen of the area have been advised not to catch fish. Apart from this, all agencies including Coast Guard are on high alert. According to the forecast, due to the cyclone, there could be storms along with rain.