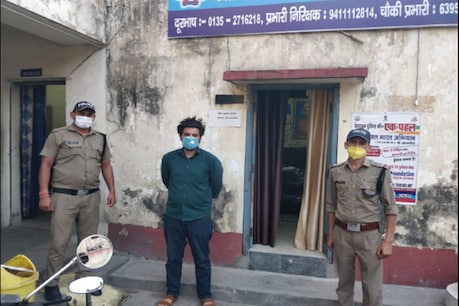 Now the police has started investigating the involvement of more people in this case.

Dehradun. A new case of cyber crime has come to light in Dehradun, when the Arghar outpost police registered a case on the complaint of the young man and arrested one of the accused. In fact, on the social site, a young man, resident of Balbir Road, informed of his mother being Covid positive and asked for help for the plasma. The applicant received a call for help and asked for a plaza, demanding Rs 2500. The applicant transferred 300 rupees before Google Pay, after which the accused kept calling him continuously for money. Along with this, the mobile number created by the applicant on social media, the applicant’s mobile number was deleted and his mobile number continued to be sent and sent on social media and demanded money from many people. Now in this case, police has registered a case under Section 420 of the Pandemic Act, IPC as well as 269, 270, 188,51b dm Act. Taking advantage of the compulsion of the people, a new method of cheating this money was devised. In which the money was being cheated from the people by making new messages by taking all the dates of the applicant. The accused carried out the incident of cheating by making a message for the plasma and putting it on social media along with his mobile number. In the era of Kovid epidemic, this different type of case has come up. Calling the applicant from the mobile number 7060328883, asking for help, he was getting money from the people. Now the police has started investigating the involvement of more people in this case. 1,88,690 patients have recovered so far At the same time, 5,775 new cases of Kovid-19 were reported in Uttarakhand on Friday, while 116 other patients died due to epidemic during this period. According to the bulletin issued by the Health Department here, till date, the number of Corona virus Infected in the state has been 2,77,585, including fresh cases. According to the Bulletin of the Health Department, the highest number of 1,583 patients were reported in Dehradun district in the latest cases, while 844 in Haridwar, 692 in Udham Singh Nagar, 531 in Nainital, 359 in Paudi and 349 in Tehri were confirmed to be infected. Apart from this, a total of 4,426 infected people have lost their lives, including the latest deaths. The number of under-treated patients in the state is 79,379 while 1,88,690 patients have become healthy so far.