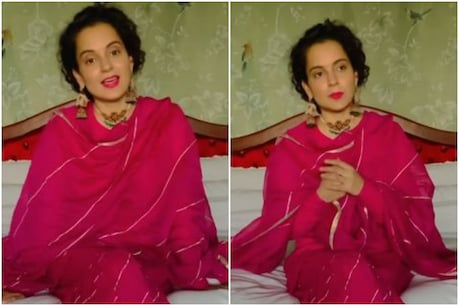 Kangana Ranaut has posted a video on the conflict between Israel and Palestine on Friday. In this, during the second wave of Corona, he told the image of corpses floating in the Ganges to Nigeria. On this a retired officer and some people have trolled him.

Mumbai. Kangana Ranaut, who lives in contrast to her social media posts, has been expressing her views on any contemporary issue with impunity. She does not care for any dispute. These days Israel-Palestine Conflict is taking place. Many people have been killed on both sides in violent clashes. Kangana has posted a video on Instagram on the conflict between Israel and Palestine. In this video posted on Friday, during the second wave of Corona virus, he said such things on the corpses floating in the Ganges that people have trolled them. In a 2 minute 53 second video, Kangana spoke many things. He said Eid Mubarak in the beginning of the video, then wished Akshay Tritiya and Parashuram Jayanti. After this he said that, ‘The world is struggling with many problems at this time. Whether it is the corona virus or countries are fighting among themselves. I think we should not lose control in good times and we should not lose courage in bad times. The actress once again praised Israel and said that only a few million people live in the country, but if 5 to 6 countries also attack it, then it attacks them together. She is saying that, ‘A woman is seen carrying oxygen on the road. Later, it was found that this video of the woman is not of the Corona era itself.

After 1.35 minutes, the actress is talking about the dead bodies floating in the Ganges. He has said that, ‘corpses are floating in the river Ganges, its photos are becoming viral in social media and it has come to know that these photos are from Nigeria.’ This is the reason social media users have trolled Kangana Ranaut. Retired IAS Surya Pratap Singh tweeted along with Kangana’s video. He wrote that, ‘Kangana Ranaut says that the bodies floating in the Ganges belong to Nigeria. I had no idea that cities like Unnao, Ballia, Kanpur are Nigerian. Kangana Ranaut says in the video after Nigeria that, ‘There are some people in our country who are defaming the country with pictures. People here are doing all this. Stabbing in our back.