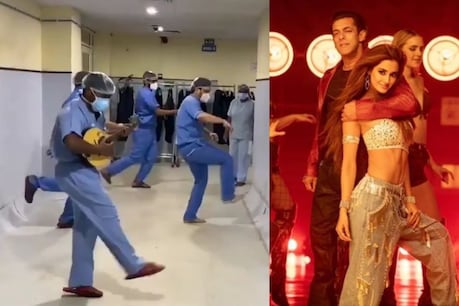 In the viral video, doctors are seen dancing to the song ‘Seeti Maar’ from Salman Khan’s Radhe (Radhe: Your Most Wanted Bhai). This video, which is going viral on social media, has been shared by Disha Patni’s Fan Club.

Mumbai These days, there is a rage in the entire country due to Coronavirus. Surprising pictures are coming out from every side. Somewhere there is shortage of beds in hospitals and lack of oxygen elsewhere. In such a situation, the maximum pressure is on the employees of the health department these days. Doctors, nurses and other employees of Health Department are giving their services with full capacity. Meanwhile, a video has surfaced, which is very happy. This video is of doctors, in which he is seen dancing to the song ‘CTet (Seeti Maar)’ of Salman Khan’s film Radhe (Radhe). This song, which is going viral on social media, has been shared by Disha Patni’s Fan Club. In which doctors can be seen dancing in a great style. In the video, a team of doctors are dancing to the song ‘CT Maar’ at different places in the hospital corridor and hospital. During this time, all the doctors are seen wearing masks and dancing to the beat of the whistle.

Actress Disha Patani of ‘Radhey: Your Most Wanted Bhai’ has also given her reaction on this. The actress has shared this video in her Instagram story. With which he has praised the enthusiasm of the doctors. While sharing the video, the actress has described the doctors as real life heroes. Disha wrote in the caption of the video- ‘Wow! Our real heroes. Now this video is going viral on social media. In which people are praising the team of doctors for maintaining such passion even in these adverse circumstances. Let me tell you, Yulia Vantur and Kamal Khan have given voice to this song from Salman Khan and Disha Patni’s movie.