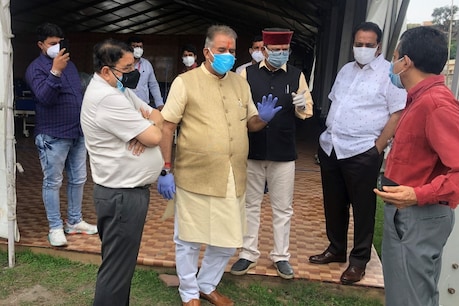 The minister in charge, who reached the Kovid Center in Dehradun, expressed his displeasure at the chaos.

Dehradun. On one hand in the state, the government is claiming to build new hospitals to improve health facilities in the Kovid era. But in contrast, the CMO of the capital Anoop Dimri could not give a proper reply to the cabinet ministers and MLAs of the state. Therefore, the angry cabinet minister has warned that he will put the matter in front of the chief minister. In fact, today, Minister Ganesh Joshi went to Raipur Kovid Care with all the MLAs of the capital, where 30 ICU beds have been made, but neither CMO nor any officer was able to answer on the spot. So the MLA of Rajdhani got angry, while Minister Ganesh Joshi also came out of anger. Minister Ganesh Joshi said clearly that there is no control over officers. They do not know how much oxygen beds they have, what is their condition. Minister Joshi said that the officials are giving wrong information regarding Kovid. Government funds are being misused to make this Kovid Center. Unnecessarily centers are being built. Officials are also not aware of how many ICUs and oxygen beds are there? Serious negligence, will send the report to CM Minister Ganesh Joshi said that this is serious negligence related to Kovid. He is the minister in-charge of Kovid here and due to this, he will make a report and submit it to the Chief Minister. He said that the government is worrying about the health of the public, but it is very serious that the authorities should not worry about it. Action will be taken against whoever is responsible in this type of case. He said that beds and ICUs can be installed, but in view of the current epidemic, it is very important to install oxygen cylinders and ICU equipment.