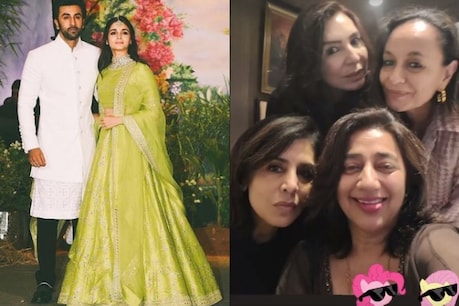 Ranbir Kapoor’s mother Neetu Kapoor has shared a photo on social media in which she is seen spending time with Alia Bhatt’s mother Soni Razdan.

Mumbai : While the shootings are stopped after the lockdown due to the second wave of Corona, many celebs are busy helping the corona infected. Bollywood actress Alia Bhatt is also engaged in providing all possible help for the treatment of corona victims these days. His social media account is full of such posts. In such a situation, Alia may not be able to meet Ranbir Kapoor but her mummies are enjoying a lot with each other. Neetu Kapoor showed a glimpse of it by sharing a photo on social media. Bollywood Veteran Actress Neetu Kapoor shared a photo on his Instagram story. In this photo, Neetu Kapoor and Soni Razdan are seen with their other friends. From the group selfie taken, it can be guessed that these people are having a good time with each other. Neetu and Soni often comment on each other’s posts. When Neetu shared the photo of her granddaughter Samara Sahani and wrote that ‘the qualities of elders come in the younger ones (my dialogue of ‘Do Kaliyan’)’, Soni commented on this ‘Aww yes wahi small face’. It is not that Neetu and Soni are hanging out for the first time, even before their photo has come together. Ranbir Kapoor and Alia Bhatt were seen together on Rishi Kapoor’s death anniversary. Neetu Kapoor had kept a puja at her house in which both of them had reached together. How close is the relationship between Alia Bhatt and Ranbir Kapoor’s family, it can be gauged from the fact that on the occasion of New Year, they went for a holiday together in Ranthambore National Park. On this occasion, Ranbir’s sister Riddhima Kapoor and her daughter and husband also reached. Apart from this, Alia’s sister Shaheen was also with her.