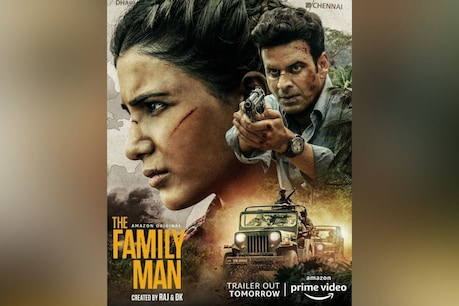 The web series ‘The Family Man 2’ is constantly getting embroiled in controversies. Now Amazon Prime Video has refused to say anything to Samantha Akkineni about this series.

Mumbai. ‘The Family Man 2’ The trailer has been in constant controversy since its launch. In this series, Samantha Akkineni is shown as a suicide bomber. Tamil fans have become angry with this role. Tamil viewers allege that in the second part of this web series of Amazon Prime Video, the Tamil community is being presented as a terrorist. Because of this, the series is being opposed.

The Tamil Nadu government has asked the Ministry of Information and Broadcasting to stop the release of this web series on the OTT platform. Amidst these controversies, Amazon Prime Video has issued an order forbidding Samantha Akkineni to say anything about the show. According to the news of Bollywood Hungama, there is a protest about Samantha’s character in ‘The Family Man 2’, but those who are protesting have no idea about Samantha’s full role. According to the news, Amazon Prime Video has issued an order to all the people associated with the content of this series to remain silent till its release.

However, the directors of ‘The Family Man 2’ Raj Nidimoru and Krishna DK and Manoj Bajpayee, playing the lead roles, recently wrote a post on social media saying that ‘Speculations are being made by looking at just a few shots in the trailer. Many members of our cast and writing team are Tamil. We have great respect for the Tamil people, their sentiments and culture. We have respect and respect for them. We have worked very hard for this show. Difficulties have been taken to bring it among the audience. It is not right to make any kind of assumption after watching the trailer. We are aware of the spirit and culture of the people of Tamil community which has nothing but love and respect. After watching this series people will fall in love with it.