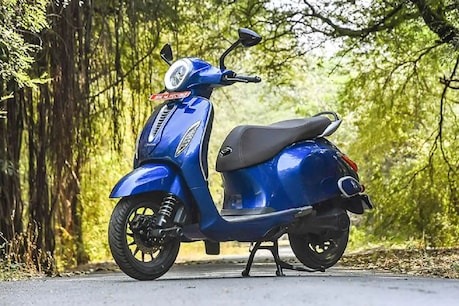 The demand for this electric scooter from Bajaj increased.

Bajaj has given designer alloy wheels with LED headlamps and LED turn indicators in the design along with smartphone connectivity, touch switch, keyless start-stop system in this electric scooter.

New Delhi. The country is currently battling the Corona epidemic, all kinds of public activities have been affected due to the lockdown. All industrial activities have also been affected due to this. In such a situation, where would the vehicle sector remain untouched, during the month of April there has been a decline in the sales of all companies. However, in the meantime the sales of the Bajaj Chetak electric scooter has increased, this electric scooter has been the best-selling electric scooter in the month of April. TVS Motors’ electric scooter TVS iQube has been at the second position. Let us tell you in this news how many scooters have been sold by both the companies in April.

Also read: Maruti Suzuki Celerio is about to be launched, know about this car

Features of Bajaj Chetak Electric – The company has launched this electric scooter in the market with two different driving modes, which are Sport and Eco mode. The company claims that this scooter gives a driving range of up to 95 km on a single charge in Eco mode and a driving range of up to 85 km in Sport mode. The battery of this scooter takes about 5 hours to be fully charged, and with the quick charging system, this battery gets charged up to 25 percent in 1 hour. Also read: These top 4 SUVs including Hyundai Alcazar and Mahindra XUV700 will be launched soon, know everything

Features and Price – The company has given designer alloy wheels with LED headlamps and LED turn indicators in the design along with smartphone connectivity, touch switch, keyless start-stop system in this electric scooter. Apart from this, a digital instrument console has also been given in this scooter. The price of this scooter ranges from Rs. 1,00,000 to Rs. 1,15,000.