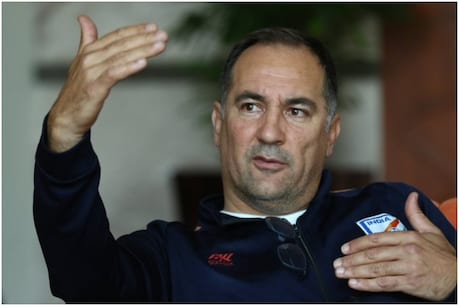 Indian players are practicing in Doha under the supervision of head coach Igor Stimak. (Twitter)

The Indian team has to play against the Asian champions Qatar next month on June 3, after which they will clash with Bangladesh on June 7 and Afghanistan on June 15. Coach Igor Stimak thanked the Qatar government and his football association for allowing training to Indian players.

New Delhi. The coach of the Indian football team Igor Stimac has thanked the Qatar government and their football association for allowing their players to train before the World Cup and Asian Cup qualifiers. India will play Asian champions Qatar on June 3, followed by Bangladesh on June 7 and Afghanistan on June 15.

Stimak said, “It is a difficult time and a lot of guidelines have been set for safety which we are following.” The coach said, “I would like to thank the Qatar government who allowed us to train in Doha under such circumstances and also the Qatar Football Association who are hosting us in such a difficult time.”

He said, ‘Qatar will host the FIFA World Cup 2022 and we all know that they have some great facilities for the football teams here.’ The Indian team, which has already been eliminated before the World Cup race, will have a goal to qualify for the 2023 Asian Cup to be held in China.

Also read, Igor Stimak will be the coach of Indian football team till SeptemberStimak is confident of the team’s good performance in the upcoming matches. He said, ‘We do not need to do anything extra to motivate the players. They are very professional and I have no problem in boosting their morale.