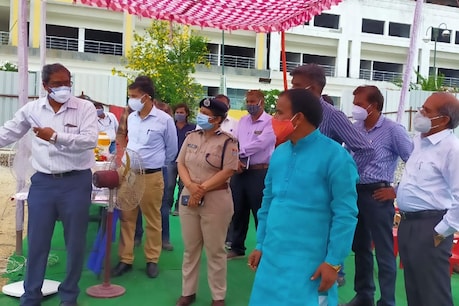 For the construction of the building, the government has approved an amount of 67 crores.

The building is specially designed having 6 floors in addition to the basement, it has been designed as per 4 star green building rating. LRB and SFCO technology is being used in this building.

Dehradun. The multi-storey building under construction in Dehradun, the IT Park complex of the State Disaster Management Authority will be the first such state building in Uttarakhand, which is being built with earthquake-resistant technology under global standards. It will be a unique example of earthquake resistant buildings in itself. Isolators made of lead, rubber and bearings (LRB) have been used in the base of the building. Disaster Management and Rehabilitation Minister Dr. Dhan Singh Rawat started the installation process of LRB isolator imported from USA by reaching IT Park premises today. Departmental Minister Dr. Rawat instructed the officers that the construction work should be completed on time, paying special attention to the quality of building construction. Departmental Secretary SA Murugeshan, who was present on the occasion, said that the government has approved an amount of 67 crores for the construction of the building, which is under the World Bank funded scheme.

He assured the departmental minister that the construction of the building would be completed on time. Vikas Barthwal, deputy project manager of the departmental construction body, said that the basement work of the building was completed long ago, but due to some reasons, the imported material took a long time to reach, due to which the construction work was stopped in the middle. He informed that the building is being prepared completely with earthquake resistant technology, on which 80 LRB isolators will be installed on the ground floor which will keep the building completely safe even in case of high intensity earthquake. Not only this, a committee of scientists has also been formed to check the quality of the building, which will inspect it from time to time and give its technical suggestions.

The building is specially designed having 6 floors in addition to the basement, it has been designed as per 4 star green building rating. LRB and SFCO technology is being used in this building, provision has been made for State Emergency Operation Center and Building Management System in this building. Provision has also been made for accommodation for the personnel posted in service in emergency situations. The building will also have many facilities including the Chief Minister as the Chairman of the Authority, the Chief Secretary as the CEO and seating arrangements for other officers.