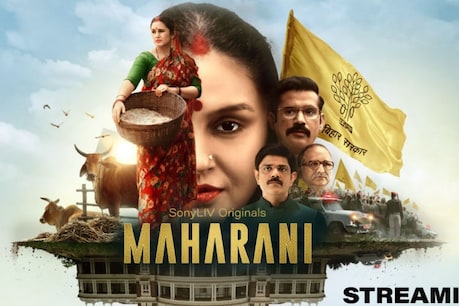 This web series of Huma has not received much appreciation in Bihar so far.

Regarding the role of Huma Qureshi in ‘Maharani’, a viewer said, “What I like about her role is that she reluctantly agrees to be the Chief Minister of Bihar, but she has made rubber Refused to be stamped. They have their own mind. She is amazing.’

Mumbai. In SonyLIV’s new web series ‘Maharani’, Huma Qureshi has played the role of a character inspired by Rabri Devi, wife of former Bihar Chief Minister Lalu Prasad Yadav. In this role, his praise is getting less criticism and more. Many people of Bihar feel that this whitewashed version of Rabri Devi is fake. Roshan Singh, a prominent film exhibitor from Bihar says, ‘Which Rabri Devi is this? When did she become the queen of Jhansi and Indira Gandhi? I think the series is sponsored by Laluji’s well-wishers and friends.

He did the right thing by changing the names of Lalu Yadav and Rabri Devi, says Patna-based steel entrepreneur Sudhir Kumar. This is not the story of Rabri Devi. If it is her own imagination, then why was the cast giving interviews about the series based on Lalu and Rabri Devi? You can’t have both these options, headline as well as fiction.

This web series of Huma has not received much appreciation in Bihar so far. Her character in ‘Maharani’ has made her a household name in the state. Rekha Vinod, a school teacher from Patna, says that Huma’s character is a perfect blend of determination and flexibility. ‘Of course they have taken great liberties with political facts, but then what was Sanjay Leela Bhansali’s Padmavat? Or Mughal-e-Azam? What I like about Huma Qureshi’s role is that she very reluctantly agrees to be the Chief Minister of Bihar, but she refuses to be a rubber stamp. They have their own mind. She is amazing.’

Huma Qureshi says, ‘It’s not often that you get to play a character that lets you explore multiple layers as an artist. It is a pleasure to play Rani Bharti. She starts out as a person we all know and relate to, but as she moves on, there are only a few of us who would love to be seen.