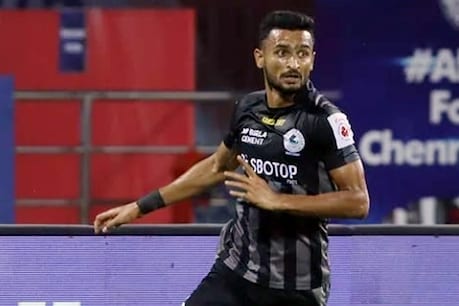 Manveer Singh said that he tries to learn from the captain of the national team, Sunil Chhetri. (Instagram)

Manvir Singh said that the momentum achieved in the previous match against Bangladesh in the combined qualifiers of the 2022 World Cup and Asian Cup will have to be maintained. He said that there was a 0-1 defeat against Qatar but now it is a thing of the past.

couplet. Forward Manvir Singh has said that after defeating Bangladesh in the previous match, India will have to maintain the momentum in their next match against Afghanistan in the combined qualifiers of the 2022 World Cup and 2023 Asian Cup. India beat Bangladesh 2-0 on Monday thanks to two goals from Sunil Chhetri, the team’s first win in the last 20 years on foreign soil in the World Cup qualifiers.

Manveer said, “We have to maintain the momentum achieved in the last match against Bangladesh and even the momentum during the 0-1 loss against Qatar but everyone knows that it is a thing of the past.” He said, ‘The match on June 15 will be like a new beginning. We have to redo everything. Coaches are constantly working with us. We have to live up to their expectations.

Manveer said that he always tries to learn from the national team captain Sunil Chhetri and Roy Krishna of his Indian Super League club ATK Mohun Bagan. Manveer, who made it to the national team after a successful domestic season, said nothing is permanent for the striker.

Also read, Coach Stimac praised Sunil Chhetri, said – 25 years old player has energyHe told AIFF, ‘When I play with the top striker, my job becomes easier. I look at Sunil bhai and try to replicate his patience on the field. In the end, playing with patience makes a big difference. This is education for me. The striker doesn’t get a lot of chances during the match.

The first leg of the FIFA World Cup 2022 against Qatar in 2019 changed Manveer’s international career. Prior to this match, the 25-year-old did not get a chance to play regularly for India, but his performance against Qatar made him a permanent part of Igor Stimac’s team. Manveer said that his father has played against Chhetri and he always advises him to learn from this Indian captain.