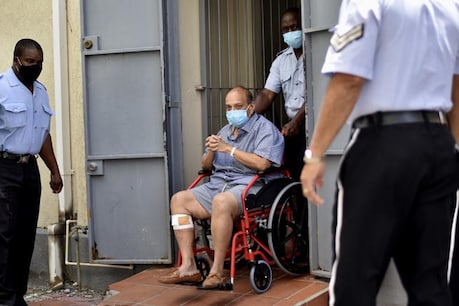 Indian fugitive diamond merchant Mehul Choksi comes out in a wheelchair from the magistrate’s court in Rociu, Dominica. (AP/4 June, 2021)

Santo Domingo. The troubles of fugitive businessman Mehul Choksi are increasing. Now Dominica has declared Choksi a banned immigrant. According to the English newspaper Hindustan Times, Choksi has been accused of illegally entering Dominica. According to a notice issued by Dominica’s Ministry of National Security and Home Affairs, Mehul Choksi was declared a restricted immigrant on May 25. The ministry had directed the police to “remove Choksi from the Commonwealth of Dominica” under Section 5(1)(1) of the Immigration and Passport Act.

According to the report, the ministry also sent a separate notice to Choksi on the same day, informing the fugitive businessman that he was “not allowed to enter Dominica”. The notice states that the police have been directed to ‘take all necessary action to send you back’. The notice sent by the government of Dominica refutes the claim of Choksi’s lawyer Vijay Aggarwal that his client was not a restricted immigrant and was abducted.

On the other hand, the Dominica High Court has adjourned the hearing on the bail plea of ​​fugitive diamond merchant Mehul Choksi till June 11. According to local media reports, Choksi had approached the high court after the magistrate rejected the bail plea. This petition was filed by a team of local lawyers of Choksi, on which the judge of the court started hearing through video conference. According to the news of ‘Dominica News Online’, the lawyer for the government side opposed the bail plea and said that Choksi Can leave the country and run away. After this, the judge adjourned the hearing on the matter till June 11. The High Court was also hearing the habeas corpus petition filed by Choksi’s legal team and its hearing was also adjourned. Let us inform that on May 23, Choksi went missing from Antigua and Barbuda under mysterious circumstances and was caught for illegally entering the neighboring country of Dominica. (with language input)