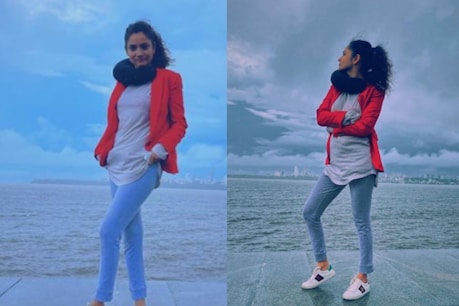 In these pictures, the actress is seen in red jacket and lower. photo credit- @lokhandeankita/Instagram

Tomorrow is June 14, the first death anniversary of Sushant Singh Rajput. Just before Sushant’s death anniversary, he shared a post. Whose caption is indicating that she is missing Sushant.

Mumbai. Famous actress Ankita Lokhande, who entered Bollywood from TV, took a break from social media a few days ago. But just a day before the first anniversary of her ex-boyfriend Sushant Singh Rajput, she has made a comeback on Instagram. She has shared a picture of herself, whose caption is indicating that she is missing Sushant.

Tomorrow is June 14, the first death anniversary of Sushant Singh Rajput. Just before Sushant’s death anniversary, he shared a post. In the picture shared by Ankita, she is seen standing by the sea and looking at the sky. The actress is seen in a red jacket and lower. Ankita’s caption of this picture is attracting people’s attention.

While sharing the picture, he has given the caption- ‘Distance doesn’t matter, because at the end of the day, we are all under the same sky’. The actress is giving a special message to the fans of Sushant through this post. Fans are commenting on this post of Ankita in different ways. This post of Ankita is also in discussions because on June 3, Ankita shared a post, in which she has told that she is going away from social media for a few days. The actress wrote that this is not goodbye, she will meet you later. Now a day before Sushant’s first death, he made a comeback on social media.

Let us tell you that recently the serial ‘Pavitra Rishta’ completed 12 years. In such a situation, Ankita celebrated by cutting the cake at home itself. He also remembered Sushant on this special occasion and said that he had taught me acting. Sushant gained popularity by playing the role of Manav in this show.