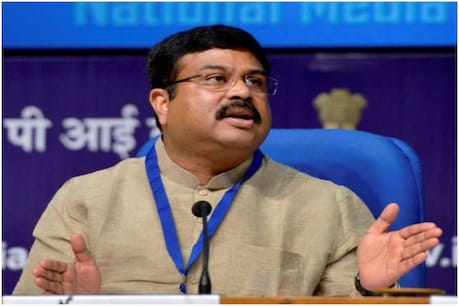 New Delhi. Petrol and Diesel Prices have reached their record level at this time. At the same time, on the increase in the price of oil, Dharmendra Pradhan said on Sunday that Congress-ruled states like Rajasthan and Maharashtra should cut tax on vehicle fuel. However, he remained silent on whether states like BJP-ruled Madhya Pradesh and Karnataka would do the same, where petrol has crossed Rs 100 per litre. He, however, admitted that vehicle fuel prices were hurting consumers.

Pradhan said that if the Congress is worried about the rising burden of vehicle fuel prices on the common man, then it should cut sales tax on petrol and diesel in the states ruled by it.

Petrol has become costlier by Rs 5.72 per liter and diesel by Rs 6.25 per liter in less than the last six weeks. Vehicle fuel prices have reached record highs due to rising international crude oil prices and higher central and state taxes. Indraprastha Gas Ltd. Talking to reporters after inaugurating the oxygen plant set up by Maharaja Agrasen Hospital, Pradhan said that the central and state governments need additional money from taxes on petrol, diesel to fight the pandemic and other development works.

Rahul Gandhi should answer, why so expensive in Congress ruled states?

Congress leader Rahul Gandhi is a constant attacker on the Narendra Modi government regarding vehicle fuel prices. To a question about this, Pradhan said why fuel is expensive in Maharashtra, Rajasthan and Punjab. He said, “If Rahul Gandhi is worried about the impact of vehicle fuel prices on the poor, then he should ask chief ministers to cut tax on fuel in Congress-ruled states.”

Pradhan, however, did not say whether BJP-ruled states like Madhya Pradesh and Karnataka would do the same, where petrol prices have crossed Rs 100 per liter due to local taxes.