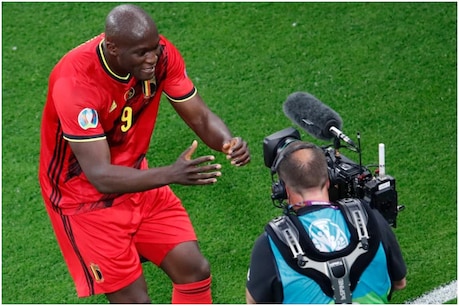 Euro Cup 2020: Belgium’s star player Romelu Lukaku also sent an emotional message for Danish player Kristian Eriksson after scoring his first goal against Russia. Lukaku went to the television camera and grabbed it with both hands and said, “Chris, Chris, I love you.”

New Delhi. Two goals from Romelu Lukaku helped Belgium beat Russia 3–0 in their first match of the European Football Championship. Lukaku also sent an emotional message for Danish player Kristian Eriksson after scoring his first goal. After scoring in the 10th minute, he went to the television camera and grabbed it with both hands and said, “Chris, Chris, I love you.” Lukaku is Ericsson’s partner in Italy’s team Inter Milan. Ericsson fainted on the field during the match between Denmark and Finland. Due to this the match was stalled for 90 minutes. By the time the Belgian match started, it was reported that Ericsson’s condition was stable.

The star-studded Belgium team dominated Russia throughout the match. Lukaku scored the goal in the 10th minute of the match. For Belgium, substitute Thomas Munir scored the second goal in the 34th minute. Lukaku ensured a big victory for the top-ranked Belgium by scoring his third goal in the 88th minute in front of 26,264 spectators. 28-year-old Lukaku has scored 62 goals in 94 international matches for Belgium. Before the start of the match, Belgian players also expressed their support against racism by sitting on one knee.

Denmark lost after Ericsson withdrewFinland beat Denmark 1-0. In the last moments of the first half, Ericsson collapsed on the ground and had to be hospitalized for immediate treatment, which halted play for nearly 90 minutes. When the match resumed, Pozanpalo gave Finland the lead in the 60th minute. He scored this goal with a header from Jere Uronen’s cross. Denmark’s goalkeeper Kaspar Schmiel hit the ball but he could not stop it. Denmark dominated throughout the match but Finland got only one chance to score and were able to capitalize on it.

2 heart-wrenching accidents in a day on the field, at Ericsson-du Plessis Hospital, know health updates of both

Denmark put six shots on the goal but it failed every time. Denmark got their best chance when they got a penalty in the 74th minute but Redecki dived to his left to block Pierre एmile Hobjerg’s shot. Finland was making its debut in a major tournament, but more than the biggest victory in the country’s football history, Ericsson’s sudden fainting was more talked about.