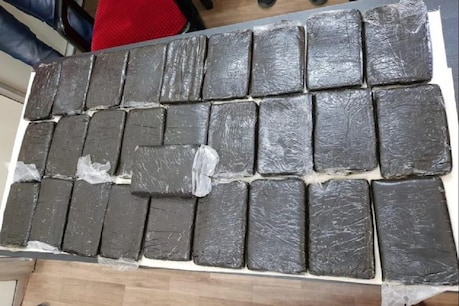 A big smuggling gang was busted in the state when the police arrested four people after seizing a huge quantity of charas. The police department got both success and grit after this big action. Know the whole matter.

Udham Singh Nagar / Pithoragarh. A big success came in the hands of Uttarakhand Police when a huge quantity of charas being transported by two vehicles was confiscated. But the police had to face embarrassment with this achievement as two of the four people arrested for charas smuggling were police personnel. The Udham Singh Nagar police recovered more than 8 quintals of charas, which was being carried by two private cars, from four people, including two Pithoragarh police personnel. After the arrest of the charas smugglers in the disguise of the police, the top police officers have said that strict action will be taken.

Kichha police arrested four accused Vipul Saila, Piyush Khadawat, Prabhat Bisht and Deepak Pandey, who were sitting in an Amaze and a Wagon R car. According to the news, out of these four arrested with 8008 kg of charas from these two cars, Bisht and Pandey are posted in Armed Police in Pithoragarh Police Line. Now action is being taken for their dismissal.

Uttarakhand: Four people, including two constables of armed police posted in the police lines of Pithoragarh, arrested by the Kichha police of Udham Singh Nagar with 8,008 kgs of charas. 1,094 kgs recovered from one car while 6,914 kgs from another car.

Was it only a gang of cops?

Uttarakhand DGP Ashok Kumar said that both the constables of Pithoragarh police will be dismissed from their jobs. Not only this, according to Kumar, if any policeman is found involved in any criminal activity in future, he will also have to lose his job in the police force. Apart from Bisht and Pandey, another accused who was arrested in this case, Vipul Saila, a resident of Adarsh ​​Colony, Khatima, is also said to be the son of Head Constable Chandrasinh Saila in Nainital district. After the capture of this whole nexus, the discussion is that the policemen of some districts are running a big gang or there is complicity of policemen in smuggling on a large scale.

Was it only a gang of cops?

Who is the kingpin and what is the business?

There were reports of 1094 kg of charas being recovered from one car and 6914 kg of charas from another car. In these reports, Udham Singh Nagar SSP Dilip Singh Kunar was quoted as saying that under the guise of police uniform, this gang was carrying out the business of smuggling, on receiving information about which the police reached the culvert of Lalpur Mazar and arrested them. According to Kunar, the business of buying this charas from Champawat at cheap prices and selling it at expensive prices in Udham Singh Nagar and other areas was going on. According to the news, the leader of this gang has been told to Pradeep Singh Fartyal, posted in Champawat. Although he has not been arrested yet.

Who is the kingpin and what is the business?