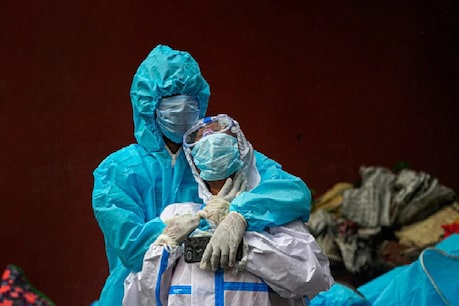 Till June 7, 6 cases of Delta+ were registered in India. (AP)

At the initiative of Global Science GISAID, Public Health England, an executive agency of the UK Government’s Department of Health and Social Care, has so far identified 63 genomes of delta (B.1.617.2) with the new K417N mutation. In the updated report on Kovid-19 variants till last Friday, 6 cases of Delta+ were reported in India till June 7.

New Delhi/Hyderabad. The delta variant (B.1.617.2) of the corona virus was said to be the most infectious ever. these Variants (Delta Covid Variant) Corona became the main reason for the rise of the second wave of the epidemic. Now scientists fear the spread of more mutant versions of this delta variant. According to scientists, AY.1 or Delta+ may mutate into a more virulent variant. This new mutant of delta virus is also capable of neutralizing the antibody cocktail. The monoclonal antibody cocktail is currently being said to be the most effective in the treatment of Kovid virus.

At the initiative of Global Science GISAID, Public Health England, an executive agency of the UK Government’s Department of Health and Social Care, has so far identified 63 genomes of delta (B.1.617.2) with the new K417N mutation. In the updated report on Kovid-19 variants till last Friday, India had reported 6 cases of Delta+ till June 7.

Vinod Scaria, a doctor and computational biologist at Delhi’s Institute of Genomics and Integrative Biology, said the important point to consider about K417N is the evidence of neutralizing resistance to the monoclonal antibody drugs casirisimab and imdevimab. Scaria tweeted on Sunday that the emerging variant was characterized by the acquisition of the K417N mutation to delta+ (b.1.617.2.1), which maps to the receptor binding domain. It is also associated with immune escape. He said, ‘The variant frequency for OK417N is not very high in India. So far only 6 cases have been reported. As the delta is developing, it is getting more mutants.

Public Health England reports that delta-AY.1 was detected through routine scanning of variations in the delta. This report stated that a small number of known sequences had acquired the spike protein mutation K417N. The first such sequence was detected by scientists in Europe in late March. Scaria said 127 sequences from Europe, Asia and the Americas are now available in the public domain. Scaria reported that many of the genomes now available worldwide were part of the AY.1 or B.1.617.2.1 lineage.

What is Antibody Cocktail Drug? How does it work?

The Swiss company Roche has made this medicine. In this, a mixture of two antibodies has been artificially prepared in the lab, which is called monoclonal antibody cocktail. These drugs are Cacirivimab and Imdevimab.

As soon as the medicine reaches inside the body, it blocks the virus. Due to which the corona virus is not able to enter inside other cells. This is possible because it does not get the necessary nutrients to spread and grow inside the body. This means that both the antibodies together prevent the virus from multiplying in the body and thus neutralize the virus.