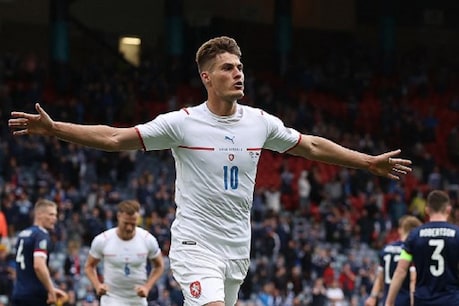 New Delhi. Patrick Schick scored two goals as the Czech Republic beat Scotland 2-0 in a Group D match of the Euro 2020 football tournament here on Monday. Patrick scored in the 42nd and 52nd minutes. The second goal of this player of Bayern Leverkusen was visible. Scotland attacked the Czech Republic’s goal but lost possession with the ball which reached Patrick. Patrick noticed that David Marshall, the goalkeeper of the opposing team, was not in his place. The Czech Republic’s player took advantage of this and hit a long-range shot which went into the goal. Marshall tried to stop the ball from going into the goal while running back but failed in his hand.

European football’s governing body UEFA has said that the goal scored from a distance of 49.7 meters is the longest distance goal of the tournament. The previous record was held by German midfielder Torsten Frings, who scored at Euro 2004 from a distance of 38.6 metres.

With this win, the Czech Republic is on top of Group D with three points from a match. England also have three points but Czech Republic are on top due to better goal difference. Scotland is playing last position without account opening. Croatia is at number three.