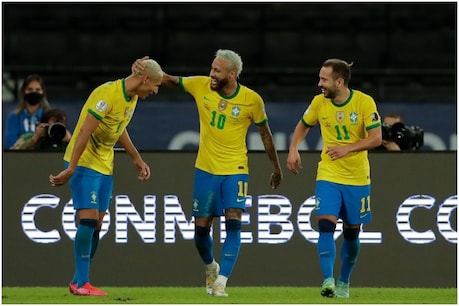 Despite changing half of their team, Brazil performed brilliantly, beating Peru 4–0 in the Copa America football match. This was the hosts’ ninth consecutive win.

Sao Paulo. Despite changing half of their team, Brazil performed brilliantly, beating Peru 4–0 in the Copa America football match. This was the hosts’ ninth consecutive win, which has proved themselves to be a strong contender for the tournament. Defender Alex Sandro, Neymar, midfielder Everter Ribeiro and striker Richarlison scored one goal each.

With this win, Brazil are at the top of Group B with six points, while Colombia is two points behind, which played out a goalless draw with Venezuela. As promised by coach Tite, Brazil is considering this tournament as a means of preparation for next year’s World Cup in Qatar. In this match, six players were given place who did not play the first match against Venezuela. Brazil won that match 3. Won 0.

Brazil won 42 matches, drew 10 and lost only four under Tite’s coach. Now they have to play Colombia on Wednesday. The top four teams from each group will reach the knockout stage.

Corona cases related to Copa America increased to 66 in Brazil

Brazil’s Health Ministry has reported that the cases of corona infection related to Copa America football have increased from 53 to 66 while a total of 6521 tests were conducted. The number of infected players or staff is 27. At the same time, 39 cases have been reported among employees. The first tournament was to be hosted by Colombia and Argentina but on the last occasion it was organized in Brazil. There have been 493000 deaths due to corona in the country and in this case it is second in the world. Most of the workers who tested positive were in Brasilia, where Brazil beat Venezuela 3–0 in the first match. Venezuela had fielded a second-rate team after a dozen cases of corona infection.

Apart from this, cases were also found in Rio de Janeiro in which Argentina played a 1–1 draw with Chile. Some cases were found in Joiânia where Paraguay beat Bolivia 3–1. The Bolivia Football Association on Thursday confirmed that two of its players were found positive. The Chilean team also said that one member has been found positive, but he does not have symptoms of corona.