The effect of the second wave of Corona Pandemic has diminished. In such a situation, the producers of the film ‘Chehre’ have announced to release it in cinemas. Fans have become quite thrilled with the announcement of the release of the film.

New Delhi: The release date of many big films is stuck due to Corona Pandemic. Fans are also desperate to see their favorite stars’ films in theaters as soon as possible. As the situation is returning to normal in the country, in the same way, Bollywood is moving ahead with the release of films. In this episode, big news has come out about Amitabh Bachchan’s next film ‘Chehre’.

According to media reports, the producers of Amitabh Bachchan and Emraan Hashmi starrer ‘Chehre’ have announced to release it in cinemas. Fans have become quite thrilled with the announcement of the release of the film. Recently, producer Anand Pandit has given a statement regarding the release of the film. He says, ‘The show should go on. It is necessary for entertainment as well as for the survival of the film industry. The effect of the second wave of the corona epidemic has subsided. Soon things will be back as before. Theaters will open again and a large number of people will reach there. 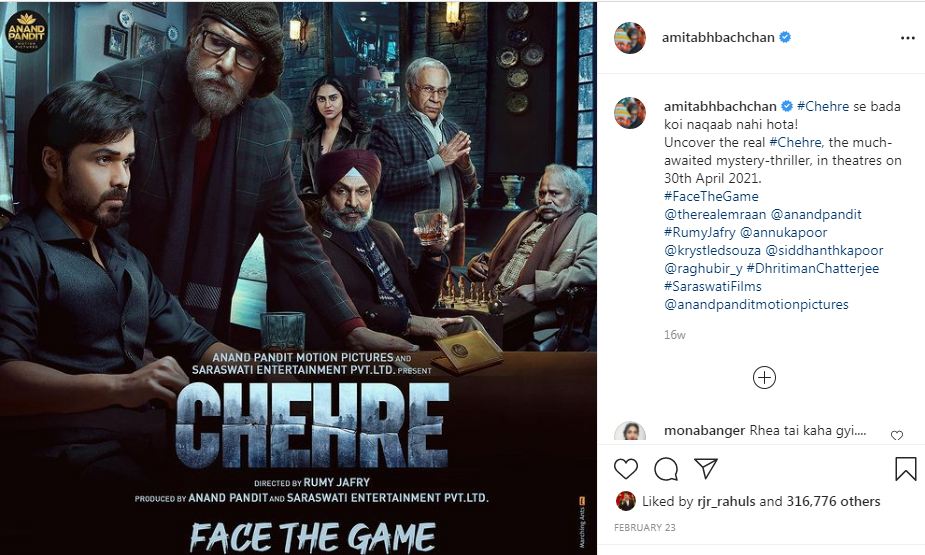 However, they also talk about being careful with Corona. He says about the release of the film, ‘We are positive about the release of ‘Chehre’ in theatres. We are ready to release the film on the big screen. We will announce the release date when the situation becomes clear. Let me tell you, a lot of money has been spent in making the film ‘Chehre’. To recover the cost of the film, the producers want to release it in theatres. Apart from Amitabh and Emraan Hashmi, actors like Annu Kapoor, Siddhant Kapoor, Raghubir Yadav have worked in this film directed by Rumi Jaffrey.