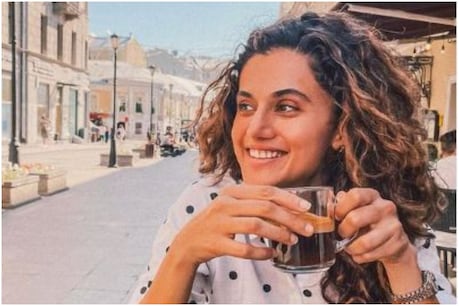 Taapsee Pannu was last seen in Anubhav Sinha’s film Thappad. He has many films in his hand at this time. He is a part of the films ‘Rashmi Rocket’, ‘Loop Lapeta’, ‘Shabash Mithu’ and ‘Dobaara’.

New Delhi: Taapsee Pannu is an actress who has not taken any formal education in acting. Still, she has convinced people with her acting. Taapsee impressed the critics as well as the audience with her strong performance in the film ‘Thappad’. Today she is counted among the top heroines of Bollywood. At the moment, she is enjoying the beautiful phase of her life to the fullest. The social media account of the actress also confirms this.

You can guess by looking at Taapsee Pannu’s Instagram account, how much she enjoyed her trip to Russia recently. The actress has shared many pictures of her vacation for the fans, in which she is seen roaming in Moscow. The actress’s holidays were over yesterday i.e. on June 19, which she had informed through a post. She writes, ‘You are really beautiful #Moscow, see you again! goodbye.’

In a recent interview, Taapsee has said that she has not taken any formal education in acting. Whatever she knows, she has learned on the set itself. The actress said that she is grateful for the opportunities she got early in her career and admitted that she would never have been able to last that long had she struggled to get the role. He also said that popularity doesn’t matter to him.

Taapsee also said that she gets bored easily, which is why she was happy to sign several films together. When the lockdown was lifted last year, the actress was among the early stars to resume work in Bollywood.

Talking about the work front, Taapsee has many films in her hand at the moment. The actress, who was last seen on the big screen in Anubhav Sinha’s film ‘Thappad’, has ‘Rashmi Rocket’, ‘Loop Lapeta’, ‘Shabash Mithu’ and ‘Dobaara’.