The actress has shared an image clicked during pregnancy on Father’s Day. (Photo Credit- @anushkasharma/Instagram)

In the first photo, Anushka Sharma is sitting with her father. In the second photo, Anushka is seen holding her baby bump on the beach while posing with Virat Kohli. At the same time, in the last photo, Virat and his dad are happily posing for the photo click.

Mumbai. Virat Kohli’s first Father’s Day is Virat Kohli’s first Father’s Day after becoming the father of a daughter. Anushka Sharma and Virat became parents to a baby girl named Vamika earlier this year. Fans were waiting for the best wishes to the Indian captain on behalf of their love. Now the wait of the fans is over as Anushka shared 3 lovely images on her Instagram account to wish her father and Virat a Happy Father’s Day 2021. Interestingly, the actress has shared an image clicked during her pregnancy.

In the first photo, Anushka is sitting with her father and both are smiling for the photo. In the second photo, Anushka is seen holding her baby bump in her lap while posing with Virat on the beach. At the same time, in the last photo, Virat and his dad are happily posing for the photo click. Anushka wrote in the caption of her post- ‘Two most exemplary men I have met. I have received a lot of love and grace from them. He is the best father for a daughter. 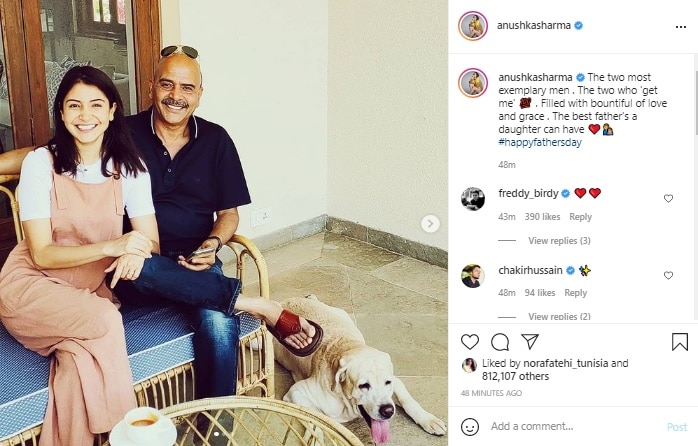 Earlier this year, on Mother’s Day, Virat wished Anushka by sharing a glimpse of Vamika. He wrote, ‘Watching the birth of a child is the most spine chilling, unbelievable and wonderful experience for a human being. After seeing this you understand the true power and divinity of women and also why God has created life in them. This is because they are much stronger than us men. Happy Women’s Day to the most fierce, kind and strong woman in my life who is going to grow up to be like her mother, and Happy Women’s Day to all the wonderful women in the world.’ Virat is currently captaining Team India in the final of the World Test Championship against New Zealand in Southampton. Anushka and Vamika are also with him.