At the same time, the feet of the bull staggered and it started flowing in a strong stream.

In Simdi of Dhumkot police station of Pauri Garhwal, a bull won the battle of life from the fast flowing rainy river. However, he started flowing in the strong current of the river. He finally saved his life after getting the support of a rock.

Pauri Garhwal. If you have courage and luck favors you, then you can escape from any crisis. It is said that in such a situation even death leaves by touching it, it cannot take you away. A similar sight was seen today in Pauri Garhwal. In the video that came from Simdi of Dhumkot police station of Pauri district, it can be seen that a bull is crossing a fast flowing rainy river. His feet are staggering again and again in the strong current of the river. His tail is raised in excitement, but he tries to cross the river in his own tune. Then the strong current of the river uprooted his feet and he started flowing in the river.

Before this very frightening scene, the people present nearby also tried to save him, but before that, once the feet of the bull got uprooted in the strong flow of water, then it went away. At first he tried a lot to save himself, but he could not stand before the fierce form of water. Although during this time he also struggled a lot to get out by balancing between the sharp edge of the water, but in front of the pressure of the water, his efforts proved to be unsuccessful.

Stream of River Vs Power of Bull 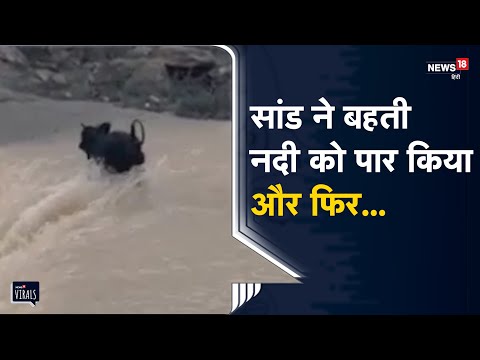 This attempt of the bull was successful

Then the bull flowing in the fast current accidentally got the support of a rock. The terrified bull kept on fixing his breath for some time and then once again he started struggling to save himself and finally somehow he saved his life by taking himself out of the water.

The bull had become the attacker

Inspector Vinay Kumar, in-charge of Dhumakote police station, says that many efforts were made to stop the bull from going into the water, but the bull attacked the people. Then people saved their lives and let the bull go. After this this incident happened. He said that after flowing in the river for some distance, the bull itself came out of the river.