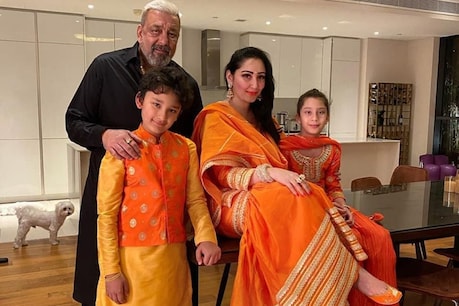 Sanjay Dutt recently announced that he has got a golden visa and happily shared the news with his Twitter handle. It is clear that Dutt and his family are in no mood to come back from Dubai with bags and luggage anytime soon.

Mumbai. Sanjay Dutt spent a week or two in Mumbai, but after that he went back to Dubai where he was living after cancer treatment and the increasing number of people infected with the corona virus in India. According to a news published in ETimes, the actor is no longer in Mumbai. Why he made this visit to Mumbai is not known but it was not just a flying visit. Meanwhile, Dutt was seen on his way to meet Union Minister Nitin Gadkari in Nagpur.

Let us tell you for information, Dutt did not have any shoot for which he had come here because the shooting of most of his films which remained incomplete, their shooting has not started yet. His wife Manyata Dutt and children did not come to Mumbai with him. The source says that these four family members are living very comfortably in Dubai for the last 4 to 5 months.

Let us remind you that Dutt recently announced that he has got the Golden Visa and he happily shared this news with his Twitter handle. It is clear that Dutt and his family are in no mood to come back with bags and luggage anytime soon. Dutt will certainly shuttle to shoot in India if needed at a later date.

On the work front, Sanjay is gearing up for the release of ‘KGF: Chapter 2’, the sequel to the blockbuster ‘KGF: Chapter 1’, which also starred Kannada star Yash along with Tamannaah Bhatia and Anant Nag. was. The actor will also be seen in the upcoming films ‘Prithviraj’ and ‘Bhuj: The Pride of India’.