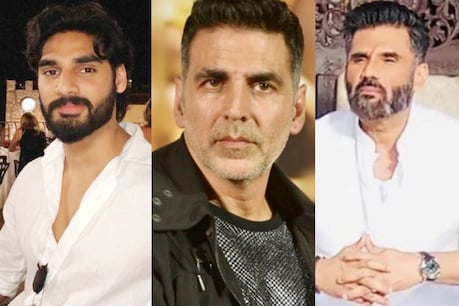 Ahan Shetty is soon going to enter Bollywood with the film ‘Tadap’.

New Delhi. Son of Bollywood’s ‘Anna’ Suniel Shetty Ahan Shetty Soon he is going to enter Bollywood with the film ‘Tadap’. The film is scheduled to release on 24 September this year. Almost all the big stars of the industry have given best wishes to Ahan regarding this film. Ahan is new in Bollywood, so people’s interest has increased about him. Now a big news related to Ahan Shetty is coming out.

If media reports are to be believed, Ahan has already got another film in his hand before his first film, in which he will be seen opposite Bollywood player Akshay Kumar. It is reported that Sajid Nadiadwala is going to produce this film. Work on this project is going on right now, and it is expected that information related to this project will come out soon. Let me tell you, Ahan’s look is similar to that of his father, his habits are also very much like Sunil.

25-year-old Ahan Shetty has completed his schooling from Mumbai and further studies from America. Ahan’s father Sunil Shetty is considered a friend of friends in Bollywood. Just like his father, Ahaan too soon becomes best friends. Ranbir Kapoor, Dino Morea, Aparshakti Khurana and Leander Paes are among Ahan’s special friends. While the appearance of Ahan Shetty is very similar to that of his father, his style of walking is also very similar to that of Sunil Shetty.