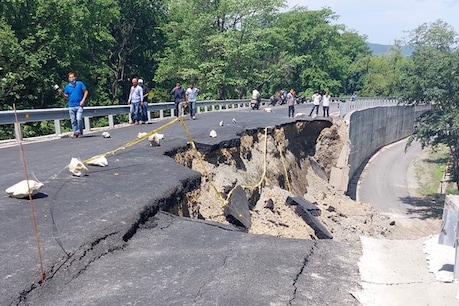 The government has sought a report of the entire matter in a month.

Dehradun News: The Uttarakhand government has suspended three engineers in connection with the collapse of the approach road, which was completed two years ago.

Dehradun. The approach road of the flyover, which was completed two years ago on the Thana motor road connecting Jollygrant Airport, collapsed. Now the Uttarakhand government has taken a big action in this matter. Based on the initial report of National Highway Chief SK Birla, Secretary RK Sudhanshu has suspended three engineers, including the Executive Engineer, with immediate effect. The suspended engineers include the names of Executive Engineer Jeet Singh Rawat, Assistant Engineer Anil Kumar, Shailendra Mishra. All the three engineers have been attached to Pauri division.

On the other hand, the flyover built to connect Doiwala Market on the Dehradun-Haridwar highway has also collapsed. Not even 6 months have passed since this flyover was built. It was built by the National Highway Authority. Taking this seriously, the government has summoned CK Singh, the regional officer of the National Highway Authority, and sought a report on the whole matter. It is worth noting that in 2018 also the approach road of the bridge built in Bhopalpani on the Thana motor road was demolished. Even then, along with suspending three engineers, an assistant engineer Kandpal was reverted. According to experts, the reverted engineer Kandpal had an important role in the construction of Bhopalpani and Barasi bridges. In this the design was completely neglected. Instead of RCC wall, retaining wall was erected in the approach road by making a blog and loose debris was filled in the road, which is now becoming a problem for the people. Knowing that it is said that now the approach road of both the flyovers will have to be made anew, then only the road will be able to last.