hinThe world of film and Bollywood is a different world, filled with typical and dramatics. One of its special features is the dialogues of the movies. Here their characters are more popular than the names of the artists, their dialogues are more popular than that. For example, as soon as we hear ‘Tera Kya Hoga Re Kaliya’, then the impression of Gabbar Singh (Amjad Khan) automatically emerges in our mind. Similarly, when we hear ‘Rishtey mein tumhare baap lagte hain’, we get connected to Amitabh of ‘Shahenshah’.

On hearing ‘K…K…Kiran’, immediately the picture of Shah Rukh stammering with ‘Fear’ flashes in the mind. Similarly, when someone says that ‘Mogembo’ is happy, we go straight to ‘Mr. Amrish of India reaches Puri. So we can say about Amrish Puri, born on June 22, 1932, that ‘Mogembo’ was happy on this day. On hearing ‘Ja Simran Jaa, Ji Le Apni Zindagi’, the face of Chaudhary Baldev Singh of ‘Dilwale Dulhaniya Le Jayenge’ turns around in front of us. There is a dialogue with the names of most of the Hindi artists.

There are few artists whose identity becomes easy with more than one dialogue. Amrish is at number one among them. ‘Mogembo’ is a cruel and anti-national villain, while on the other hand Chaudhary Baldev Singh is a passionate father. This one example is enough to tell how versatile actor Amrish Puri is. Almost the same story is of Amrish’s other films as well, multiple films.

In his debut film ‘Hum Paanch’, his character is that of a lustful, adulterous man, seeing which the audience turns his back in disgust, while on the other hand, ‘Ghatak’ is a cancer-stricken father who is a sympathetic concern for himself in anyone’s mind. produces. Amidst these contrasting characters, remember Amrish from Chachi 420 and clap your hearts openly on the comedy.

Amrish Puri’s life is not only an inspiration to the artists of the fictional world of the film, but his life in personal life is also a source of inspiration for the common people. For those who cry for age, it is important to know that Amrish Puri got his first film after turning forty. After this age, artists start taking steps towards retirement. Strugglers can rest easy knowing that Amrish Puri was rejected after his first screen test.

Amateur theatre, after a play, becomes a director and soon after becoming a director, he turns to Bollywood. Such eager painters should learn the lesson of being patient from Amrish Puri, who gave ten years to the theater. After that he got work in films and he was able to prove himself. Jurassic Park’s Steven Spielberg says ‘Amrish is my favorite villain. The best the world has ever produced and ever will. (Amrish was my favorite villain. He was the best in the world and always will be.)

The story of Amrish Puri’s entry in films is no less interesting than any interesting film. There are all kinds of ups and downs in this film. Amrish was born in Nawanshahr, Punjab. His father’s name was Lala Nihalchand and mother’s name was Ved Kaur. K.L. Sehgal was his cousin. Amrish Puri’s father disliked the film world because of Sehgal’s drinking habit. He did not want his sons to work in films at all.

But look amazing, his three sons Chaman Puri, Madan Puri and later Amrish Puri made their career in the film world itself. Two elder brothers were already in the movies. Madan Puri was the established villain. So it can be believed that Amrish Puri will get an easy entry in films. But the exact opposite happened. After a long struggle, Amrish Puri reached Mumbai and camped at Bhai Madanpuri’s place. Madanpuri gave a place in the house but clearly said ‘Make your own career’. Let us also clear a misconception of the people here, Om Puri has nothing to do with Amrish Puri or his family.

Amrish Puri was rejected in the screen test
However, as mentioned above, Amrish was rejected in the first screen test. It was okay till the rejection, the test taker had clearly said that Amrish cannot become a hero. Try Villain. In those days, the villain did not have a lot of status. So Amrish was disappointed. Even after continuous efforts, nothing was achieved, so he said goodbye to this line and joined a government job by holding the opposite line.

Now he was an employee of the Employees’ State Insurance Corporation under the Ministry of Labor and Employment. The wives also became householders with children. There was a twist in the story again. One day he collided with top playwright and director of National School of Drama Ibrahim Alkazi. He advised ‘do theatre. The worm of acting was there, so another big personality of the theater reached the eccentric theater artist Satyadev Dubey and started the theater. Now the Prithvi Theater in Mumbai was his new haunt. 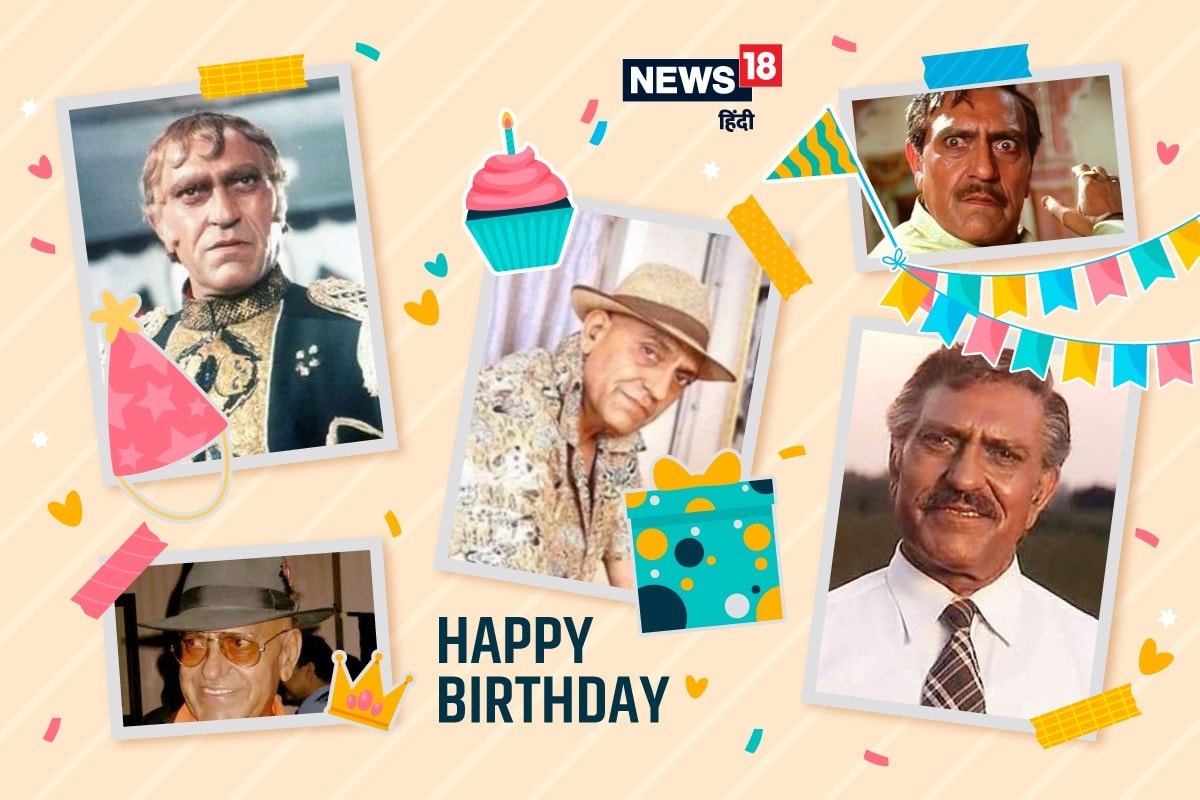 Not only did he have acting talent, he also had a lot of attachment, but it was bound to be icing on the cake, with a personality like Satyadev Dubey. He made such a coin of his theatrical skills that he became the star of the world of theater. Due to this, he was awarded with prestigious awards like Sangeet Natak Akademi Award in 1979. By now his age had crossed forty years. The hopes of the film world were over. But luck again took its turn and they reached where they had come to Mumbai.

In 1980, he got the role of the main villain in Boney Kapoor’s first film ‘Hum Paanch’. Before that, he had done sporadic work. Who had the courage to ignore him once he came on screen in a full flesh role? In 1982, he got the role of a villain in the show Main Subhash Ghai’s superhit film ‘Vidhata’. Dilip Kumar, Shammi Kapoor, Sanjeev Kumar, Sanjay Dutt were in this film. Later, he also became the main villain in Dileep and Amitabh Bachchan’s famous film ‘Shakti’.

Amrish Puri, known as ‘the magician of voice’
Known as the magician of voice, Amrish Puri went on to make inroads in the minds of the audience with his unique get up, interesting gestures. The great dialogue delivery with the big eyes, strong spirit and hoarse voice made Amrish Puri the favorite villain of the audience. Apart from doing pure formula films, he also did some offbeat parallel cinema like Nishant, Manthan, Bhumika, Aakrosh and Sooraj Ka Saatth Ghoda.

He was such a prodigious actor, who was the favorite of showman Subhash Ghai, who made formula films. Dhir was also a favorite actor of Gambhir and director Shyam Benegal, who worked for Off Beat Cinema. When Shekhar Kapur, known for classic films with a commercial touch, began his search for an actor for ‘Mogembo’ in ‘Mr India’, the search ended with Amrish Puri. You may forget the other actors of this commercial film of Shekhar Kapoor, but it is not in your control to forget ‘Mogembo’.

In the long period between 1967 and 2005, he did more than three and a half hundred films. There was a time when Amrish Puri became an actor guaranteed to be a hit. Apart from Hindi, he also did Telugu, Kannada, Tamil, Malayalam and Marathi language films.

An important film to mark his presence in Hollywood was Richard Attenborough’s ‘Gandhi’. When Jurassic Park’s Steven Spielberg was making ‘Indiana Jones and the Temple of Doom’ in 1984, he wanted to take Amrish Puri and sent him a message that he should come to America to give a screen test. In response, Amrish Puri said, ‘If you want to take the test, then you come here.’ Spielberg came to India to take the test and thus Amrish became a part of his film.

Google honored Amrish Puri in this way
During his film career, he not only got the love of his audience, he also got many national and international awards including Filmfare. There is also a long list of films and awards. He died on 12 January 2005 after a prolonged illness. He was diagnosed with a rare type of blood cancer. Two years ago (on 22 June 2019) on the occasion of his birthday, Google honored Amrish Puri with Google Doodle. The meaning of the accompanying text is as follows-

‘If you don’t succeed the first time, try, try again. And you can be like Indian film actor Amrish Puri, who overcame the initial setbacks to fulfill his big screen dreams. He used to work continuously on his voice and used to do regular Riyaz. He shaved his head for Indiana Jones. Later he adopted this style and worked with a wig when needed. The dialogues of his films have been very appealing to the Indian audience. In the movie ‘Tehelka’, ‘Dang’ (Amrish Puri) says ‘Dang, Kabhi Raang Nahi Hota’. what do you say ?
(Disclaimer: These are the personal views of the author. The author himself is responsible for the correctness / accuracy of any information given in the article. News18Hindi is not responsible in any way for this)