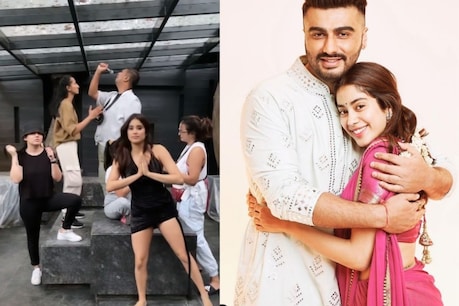 Many celebs as well as brother Arjun Kapoor reacted on a funny video shoot of Janhvi Kapoor.

Mumbai: bollywood actress Janhvi Kapoor Got a funny video shot. This video started going viral as soon as it was shared on social media. All the people present in this video are seen dancing while doing different types of antics. Seeing the expressions of everyone including Jhanvi, the celebs as well as the fans are not able to stop themselves from laughing. Arjun Kapoor, the brother of the actress, reacted a little serious to this video showing nobility.

Actually, Jhanvi Kapoor has shared a video on her Instagram. In this video, Jahnavi is looking very glamorous wearing a black color backless dress. Apart from Jhanvi, all are seen in casual look. In this video, the actress is seen dancing with her gang. The actress is also seen dancing with slippers in her hand. The caption with this video read ‘Aksa gang is back, Mehnaz Kotwal is missing you’. Seeing this funny video, friends of the industry are commenting fiercely. Fashion designer Masaba Gupta, daughter of Neena Gupta, wrote ‘I am dying’, while many celebs are laughing and commenting. Brother Arjun Kapoor wrote ‘Umm, will have to discuss this separately at dinner’. Janhvi has also reacted by sharing emoji on this comment of brother.

Namrata Purohit wrote ‘I missed it’. Actor Sanjay Kapoor called it ‘Osam’, so many celebs are enjoying his expression. Before this, Jahnavi Kapoor shared a photo with Papa Boney Kapoor and sister Khushi Kapoor on Father’s Day. Apart from this, the actress is sharing photos showing nature love on social media these days. Recently, a mystery man was seen running along the seashore.