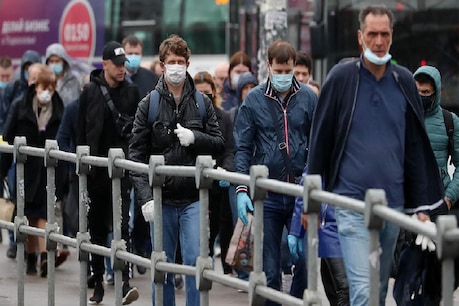 According to the Bloomberg Vaccination Tracker, only 30 million people in Russia, which are supplying vaccines to the world, have got the vaccine so far. This is only 11.2% of the total population. In this also 12.3% people got the first dose and 10.2% people got both the doses.

Washington. The cases of Coronavirus cases in the world may have reduced, but new variants of Corona are becoming a new challenge. Britain’s Scientific Advisory Group for Emergency has expressed the possibility of the situation of Corona becoming serious in winter. On the other hand, people who have now been vaccinated in Russia will be re-vaccinated (Covid Vaccine). Russian President Vladimir Putin has said that the situation of infection in many areas of the country is serious. Therefore, work is being done on the plan to vaccinate people again in these areas.

This has been said in the report of Russian Times. According to the report, new cases of corona are increasing continuously in Moscow. In Russia, 17 thousand 378 new cases came in the last 24 hours. During this 440 people died. On Monday, Putin said in the lower house of Parliament – ​​’Unfortunately, the threat of Corona has not reduced.

In many areas the situation is worse than before.

China ahead in vaccination, claims to have vaccinated 1 billion people so far See how many cases of corona in which country and how many patients have died so far.

According to the Bloomberg Vaccination Tracker, only 30 million people have been vaccinated in Russia, which is supplying vaccines to the world. This is only 11.2% of the total population. In this also 12.3% people got the first dose and 10.2% people got both the doses.

America will give 55 crore corona vaccine to the world, Asian countries including India will get so many vaccines

Let us tell you that Russia’s Sputnik-V vaccine is the world’s first registered corona vaccine. The success of this vaccine is 91.4 percent. According to the information given on the official website of Sputnik-V, a total of 78 confirmed corona cases were tested in the first final phase of production. Of these, 62 were given a placebo dose and 16 a vaccine dose. The result of which came as 91.4 percent success. Recently, emergency use of this vaccine has been approved in India, after which it is also being available at vaccine centers.